Home Migration and Borders An account from No Borders camp 2011

An account from No Borders Camp 2011, Siva Rika, Bulgaria: This year’s No Borders Camp took place in Bulgaria, a country with a horrifying history of alienation and persecution. But hundreds of international activists are trying to raise awareness about refugees, and the importance of helping them, so that history does not repeat itself.

By Lilith, activist in the Danish asylum group “Stop the Deportations” · Photo by No Border 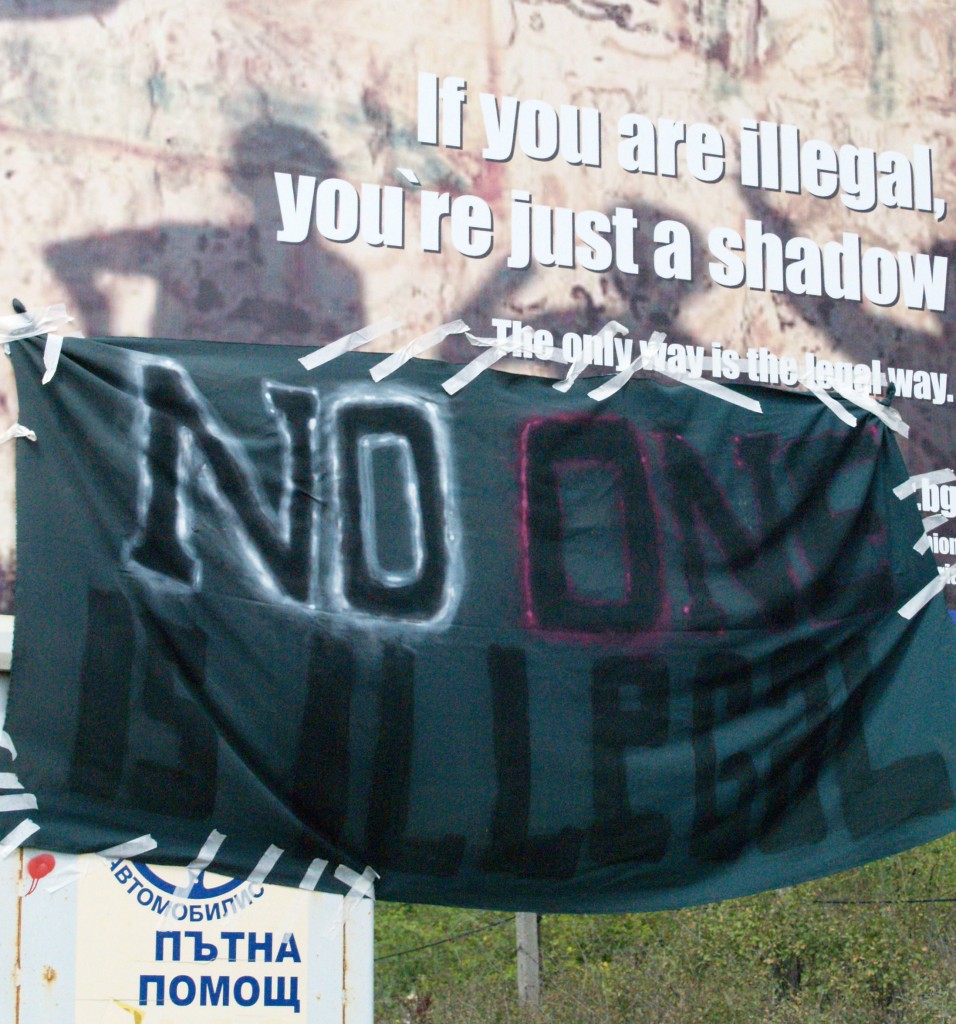 “In their homeland, everyone is somebody. What do you rely on here?

Who are you and where are you running from? You probably think your homeland hates you. But how can we help you if you are just a shadow? And we can’t know each other. You have no documents. No money.

This what you left for, right? Now is the time to go back.

There is no better way to go back to your country than the voluntary way.”

The 2011 No Borders camp took place in Bulgaria between the 25th and the 29th of August. There were approximately 200-300 participants from all over Europe, Australia and the USA. The annual camp was placed in Siva Reka close to Svilengrad in the south of Bulgaria bordering Greece and Turkey.

The first No Borders camp was in Bulgaria in 2005 and, when looking at the text above that is part of a campaign consisting of flyers and enormous billboard adds

A history of refugees

The location of the camp is extremely meaningful since it is situated in a historically notorious border region. During the Nazi regime the area was closed off and its inhabitants forced to show special passports to be permitted entrance to their homes. When talking about refugees, the inhabitants old enough to have lived through the second World War remember the massacre of the Jewish population.

This area was also the border between the Soviet Union and Western Europe during the Cold War, and the forested demarcation became an obvious escape route in those times. Today, those fleeing are most often on their way into the European Union, and one of the criteria’s for admittance in Schengen has been to stop the migration from south and east.

The camp’s first action was a demonstration against the border police in the nearby town of Svilengrad. The demonstration started with small actions in the town’s pedestrian street. Some handed out global passports, others wrote, “No one is illegal” with chalk on the street and a samba band accompanied all along.

The demonstrators then walked to the headquarters of the border police – the aim was to talk to the inhabitants and create awareness about the fact that it was not illegal to be a refugee and that it was possible to help people who flee without handing them over to the police. Such awareness raising is fundamental in an area which many people have to cross when fleeing, given the reactions of the inhabitants towards refugees is of great importance for their successful migration.

The actions on the second day were directed towards the European Union’s outer borders. The participants of the camp had planned non-violent protests against the borders in small de-centralized groups. Many crossed the borders with homemade global passports, hung banners along the road and sang “anti-frontex” songs. The border police at the Greek border handed out flyers, as quoted above, to the ones demonstrating in English, Arabic and Bulgarian to promote their campaign against migration.

The protests targeted the problematic nature of borders, with banners focusing on the fact that borders serve to make certain people – refugees – ”illegal” peoples.

The outlawed behind bars

On the 4th day of the camp there was a mass demonstration in front of the regional asylum center. Here it became obvious how people who flee are being made into outlaws. Three meter high walls with barbed wire on top surround the building with barred windows, behind which the »outlawed people waved at us«. The activists had planned different protests but were stopped by a massive police presence and riot units with dogs. From a distance it was possible to communicate with the refugees in Arabic, French and Farsi.

The participants in the No Border Camp have many different backgrounds, but even for the ones with the utmost faith in politicians and the rule of law, an experience like this must have filled them with doubts. The laws that are created to give refugees rights are exactly the ones turning them into outlaws, making them “the other” to whom we need to pay special attention.

The manifestations questions the states with their borders and parliamentarians representing their populations increase the otherness, close borders and criminalize refugees.

The goals of the No Borders movement are implicit in its name: no borders, no laws to outlaw refugees, and for ordinary people to start taking responsibility for migrants instead of handing them over to the police.

Based on the conversations with the older inhabitants of Siva Reka who remember the past wars, it seems that some of our dreams have the potential of coming true, at least on a small scale.