Being a refugee. Being a woman. Being in a camp. In a strange country. Waiting to know the fate of one’s future. Many different factors make up the situations for people seeking asylum. Here we bring the first of two interviews with female Iranian refugees focusing on their perspectives on gender discrimination and desperation in an asylum camp 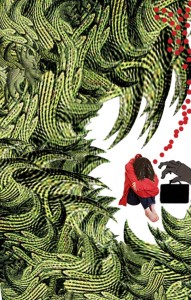 So, how is life in Sandholm these days?

Actually, to me life isn’t as bad as you might have heard, but sometimes it’s so boring and then I get really homesick. I’m here on my own and actually I worry more about my parents than I worry about myself. I’m their only child, they don’t have nybody else. I just wish I could see them, wherefore this delay of my case is really hurting me. But now that I’m here, I have to see things from a more positive side. I have some friends in my room, we can go out and do stuff, so I guess in a way it’s good. But sometimes I feel so alone. There are only a few women in the camp I can talk to, but mostly we are afraid of leaving our rooms, of going to the cafeteria for instance.

Why are you afraid of leaving your room?

I think around 80 % of the population in the camp are men, which makes me feel that I cannot be free. In Sandholm you’ll meet men from different countries with various views on women and gender roles. We have to be really careful as women. I don’t like to be afraid though, to be this sort of a careful and afraid woman, but here it’s hard not to – especially for those women who have psychological disorders.

How do you experience gender discrimination in Sandholm?

Mostly the bad situations in the camp are related to drugs and alcohol problems. I actually feel sorry for those kinds of men myself.

What do you mean by bad situations?

At the moment we are four girls in my room. One day some guys on drugs hammered on our door and one of the guys tried to come in and give us money. He thought we were some kind of female service. And then there is also this other creepy guy. At first he was trying to make a pass at me saying things like you are so beautiful and two seconds later he would say you are so ugly or you have to show me respect. He really freaked me out, so I pretended he was not even there. Then one Monday morning in the cafeteria he came to me and cursed at me in the most degrading way you could imagine. I can’t translate it because it was in Persian, but it was really ugly. I was really afraid, so I went to the Red Cross and they tried to work it out. The problem is that he doesn’t even listen to the boss of the Red Cross. He’s really weird and everyday he takes a step closer and closer to me. Now I’m kind of used to it, I guess.

Do you feel that the Red Cross workers are protecting you against such situations?

I kind of do. After the incident with the guys in our room, they gave us a phone number and told us to call if something happened. I never called them though. One time when I wanted to call them, I couldn’t find the number because I was so afraid.

What would improve the women’s situation in the camp?

In a way it would be better to have separated camps, but in general it’s no problem for me to be among men and of course it’s not all of the men in the camp who are problematic. It’s just those specific abusive men with psychological problems and on drugs! I used to play basketball back home, but when I went to the basket area in the camp, all the guys would gather around me and I thought, oh my God, I can’t play here. So at least it would be better to have some sport areas only for women. That would be much more comfortable and then you wouldn’t have guys staring at you all the time just because you are a woman and the women are few.

How do you feel about having an age where it under other circumstances would be normal to have children?

I’m not the family kind of person, but you are right, people in my age are getting children. I would never think of having children now, and certainly not in the camp. No. Never. But talking about children, actually there is this problem in the camp with women who first receive negative responses concerning their asylum cases from the Immigration Service and then after that become pregnant without knowing who the father is. Then because they are pregnant, they’ll become positive. I think it’s really stupid to do something like that – the children are born into a camp that is like a jail, they don’t even know their father. But I understand the process though, it’s the w a i t i n g that destroys them, they are afraid of being sent back home and feel that it’s their only way out. It’s the pressure in the camp that makes people do stupid things like this and it’s the exact same process with the suicide attempts. The waiting time makes people desperate, but such desperate actions never help. It’s the worst solution to our problems.

Is there any solution to your problems?

To prevent things like that, people in the camps should really try to gather their minds. The pressure in the camp is extreme, which makes it easy to loose one’s mind and do something you didn’t really want to do. If only the uncertainty and the pressure were much lower, I mean even if we had the guarantee that negative meant out of the country, positive meant you could stay. But it’s not like that. People start to do stupid things because they don’t have a way in front of them, and when you don’t have anything in front of you, you don’t have anything.

… then there is only have the waiting…

Exactly, there is only the waiting. I’m trying to work all of the time not to feel this waiting. But there is not much to do here and it doesn’t matter how much I try to make myself busy – it doesn’t help. These few months I have been waiting have been like years to me. I don’t know why they keep me waiting for so long. Even if they gave me negative, I would say, it’s okay, I could leave the country, but don’t give me the waiting. I mean, the moment I set my feet in an Iranian airport, I would be completely done, but I don’t know what the worst thing would be – to be handed out to the Iranian police only to be put in jail or the waiting time in the camp?

Yeah! And my situation in Iran is really bad. If I could stay, I would never leave my home country. In Denmark you can do political activism without going to jail, but in Iran the situation is different. They tried to kidnap me twice and I knew that they would get me eventually. I spend four months in Turkey and then I was sent to Sandholm. Thank God that I came safely to Denmark, but on the other hand, I have the feeling that my situation here is just as bad, only in a different way.

What do you do to make your situation here bearable?

I’m the kind of person who needs to get out, to work and earn money, I need to have projects running. One thing I can do here is to translate for the old women in the camp who can’t speak English. It’s a huge problem that the Red Cross workers can’t understand them and I put a lot of effort in trying to help these women. This is the only thing I can do, but it’s not enough anymore. I want more, I want to have a life. The Immigration Service would do well in considering our cases more thoroughly and often. There are different people in different ages with different stories and different cases. I mean, how long can people wait?

What is your impression of the Danish immigration system?

I give them that they take us in and try to help us, but sometimes I feel that the Red Cross workers don’t like us. It’s not on a personal level of course, because every time I go there they are nice to me, but whenever they have to speak with an Iranian or an Afghan, or with people with that kind of nationalities, they are yelling and mostly not even listening. One time I went there with an old Iranian lady to tell them that she needed a translator, the guy at the reception started to yell at us. We don’t have any translator, we don’t want to talk with you, he yelled and then he threw the old woman’s ID at her.

And what about the police officers?

Today this guy came to Sandholm. In another camp he got negative, he was sad and in huge pains because he had a problem with the back of his neck. The police told him that they couldn’t send him to the hospital, it would be too expensive for them to pay for his surgery, they told him, and because he didn’t respond, the police officer just throw him down and started to beat him.

He really beat him up?

He did, in a really rough way actually. Afterwards he got these black outs. I took him to the nurse and tried to solve the problem. On one hand the police and the Red Cross workers are nice, trying to help, but on the other hand you can always feel this difference between you and them. When I told the Red Cross workers about the problems with the guys who came to our room, they said don’t worry, we will help you, you are almost one of us. This notion of almost really hurt me. We are all people and for me there’s no difference. I know what I am. So what are you? I’m just a person waiting to get accepted.

And do you think you have reasons to be accepted and granted asylum?