Home Art and Media Giving Harbor: A Day With Friends On The Quay

It was a slightly cloudy day and some friends had gathered to discuss an interesting topic.

But what was the topic that we discussed?

It was very interesting.

We had written a text with big letters along the pier, so that the people passing could read it and understand.

Do you know what we had written?

It was a very beautiful and interesting text:

”In Iran I was a psychiatrist. My existence stopped when I arrived in Sandholm.”

Do you know why we wrote that?

So that all the people passing could read the text and understand that there exist a lot of people who do not have the possibility to live in their own country, and so are forced to seek refuge somewhere else.

Read more about the project here

A lot of people sailed back and forth in the canal and where puzzled by the text. But we were happy that people, in this way, became aware of the issue.

We forget to mention that we also enjoyed a nice pizza that day, and that everyone had fun, chatted, and laughed together.

But the most important message was that everyone has the right to live. This is also written in the Universal Declaration of Human Rights, article 3: “Everyone has the right to life, liberty and security of person.”
Likewise, the first article of the declaration says: “All human beings are born free and equal in dignity and rights. They are endowed with reason and conscience and should act towards one another in a spirit of brotherhood.”
Thus, we ask all states – and especially the Danish state – to take seriously the rights of refugees. They are humans who face problems and who are deprived of their right to live. At the same time, we ask everyone to look at refugees with friendly eyes instead of looking at them with disgust.

And so we discussed this and that about the issue. And all of us where happy because we were able to send out our prayer and message to everyone.

That same day, my good friend Søren asked me if I wanted to write a short story about our small gathering, and I said, “yes.” And so, I hope that the readers will understand what our little gathering was all about. 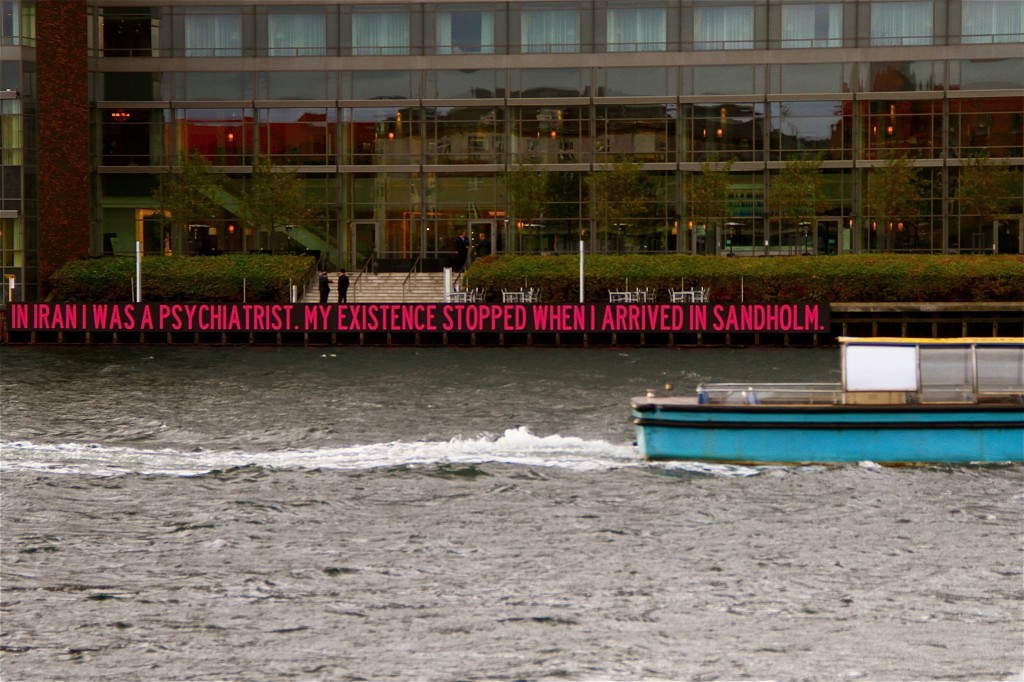 Giving harbor is an art project by artist Brett Bloom in collaboration with the Trampoline House and visAvis. The project is located in the harbor of Copenhagen and runs from September 12th to October 15th.

Together with people from visAvis and the Trampoline House who are seeking asylum, Brett Bloom has formulated a number of statements on the experience of people who seeks asylum in Denmark. Giving Harbor places phrases in the spaces of the Copenhagen harbor in order to give voice to people who are otherwise excluded from society and hidden from the public sphere. In that sense Giving Harbor investigates the inclusion/exclusion mechanisms of the national community.

Read Brett Bloom’s report of the Giving Harbour project on: