In this interview we talk with deported Maureen trying to survive a sever sickness in Cameroun and her Danish lawyer Poul Roepstorff trying to explain why the Danish Asylum system couldn’t give her humanitarian residence here. 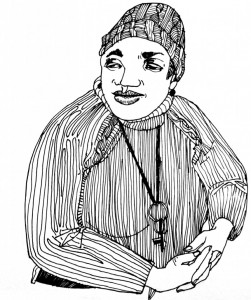 From University to asylum camp

In 2003 Maureen Ngee Chi came from Cameroun to Aalborg University in Denmark to complete her studies in sociology. After three years Maureen got sick – very sick. Her illness was so severe that she hovered between life and death. Thanks to her residency in Denmark she survived. In the wake of the disease she was found HIV positive.

When I got to know Maureen she had been in Kongelunden asylum center for two years. The effect of here illness was so sever that she applied for humanitarian residency since she didn’t think she could survive in Cameroun.

On January 3, 2011 Maureen was deported – sent back to Cameroun. She was told to get ready to leave the country only a few days before. She had no idea that she would be deported when the police came and told her that she had to get ready. The proclamation that would inform her was sent from the Danish Integration Office on December 23 to Maureen’s lawyer, Poul. By the time the letter reached his office it was Christmas.

The legacy of estimation

In cases like Maureen’s the decisions are based on “estimations” that are the only decisions one cannot legally affect. As long as the ministry follows the law and does not make a fault in the procedure, there is no institution that can question the legality of the “estimations”. It is the Integration Minister who decides on which grounds and within which parameters the public servant should make their “estimations”.

A brief dialogue that gives insight into the practices, processes and outcomes of Danish asylum policies follows below. There is nothing spectacular about this case. It is just a case among many others. The participants are Maureen Ngee Chi, Poul Roepstorff, her lawyer, and myself, Joachim Hamou.

To start with I asked: ’What is the reason for the deportation?’

Maureen: The reason for my deportation was that I can get medication in my country and that it’s free.

Poul: The reason was that the Integration Ministry did not consider that the standard practice [for humanitarian asylum] was a basis for giving her humanitarian residence here in Denmark.

The main reason for the decision of the ministry was that they had received some medical information about her treatment against HIV/AIDS and the following infection of parasite in the brain. These statements based on an opinion from a doctor at Hvidovre Hospital, suggested she could be treated in Cameroun since it was possible to get medication for HIV/AIDS get there. The information is based on an interview the Danish Consulate General in Cameroun made with a senior official in the Cameroun Ministry of Health (…)

In spite of the opinion of two other doctors in Denmark (one being her own general practitioner) the Integration Ministry said that returning to Cameroun would not significantly worsen her illness. The practice of the ministry is based on the assumption that the risk of not getting the same standard of treatment as in Denmark is not enough to give the applicant a humanitarian residency permit if the applicant’s home country can give the applicant proper treatment.

Joachim: Can the Ministry choose the interpretation they want?

Poul: Yes, it is an estimate.

Joachim: How did the deportation proceed?

Maureen: I was at my room one noon and a police officer came with a paper saying that I have to leave the following day at 04:30 a.m. I could take along 20kg; that’s my basics, like underwear and some few dresses the pair of shoes I wore. There were two Danish authorities, Jette Yro from Red Cross and also one Danish authority; Jens.

Poul: I had requested the Parliamentary Ombudsman that he reviewed the case in order to determine whether the Ministry was guilty of discrimination. But the Ombudsman informed me that the Ministry had not taken my complaint as reason enough for a resumption of the case since there was no final decision made yet, So I figured that the Ministry would take a decision based on my requests to the Ombudsman. Finally they did – on December 23, 2010 – “Little Christmas”. But it’s not their job to investigate whether the addressee is present or not and since my office was closed between christmas and new years eve I never received the extradition. The Ministry is only required to notify the lawyer and not the applicant. So Maureen never knew about the letter until the police came December 30.

Joachim: What is written in the letter that was sent to you on December 23?

Poul: It was a review of the case where the Ministry referred to earlier decisions (…) Now the Ministry believed the limit was reached. Joachim: That sounds brutal. Poul: It was brutal. On December 30 at 1.20 PM the police assistant Claus Gabel came to the center and personally delivered the letter from his colleague Frans Thorsteinsson informing Maureen of her extradition 3 days later. She was completely chocked, of course, and called Tone from the Trampolinehouse who called me. But by now it was too late to act. So on January 3 at 04.30 Maureen met Jette Yro and Jens Dyhr from the Red Cross in the reception of Kongelunden. Their job was to make sure the procedure was correct and that Maureen entered Cameroun and got immediate medical care.

Joachim: What happened once you arrived in Cameroun?

Maureen: My old mother picked me up. Since I didn’t have a Cameroonian national ID card I was kept for about 7 hrs before one Cameroonian police who is a friend of one of my cousins helped me being release. The procedure was so bad, because I was harassed and knowing how corrupt Cameroun is, they asked for bribe in order to release me. I live with my mother and nephew in a small village called Dibanda.

Joachim: Poul – what now? Are you going to make a complaint?

Poul: No. I have – so to say – “been allowed” not to go further with the case. Tone, Karinsha and others at the Trampolinehouse believed it was useless. It was important now to monitor her condition and situation. Something the Ministry also emphasized; she has family in Cameroon and they have actually helped her.

Joachim: It is her mother…

Poul: Yes, and the Ministry emphasized the fact that she has family that can take care of her. They didn’t believe her when she said there was no help in Cameroon. But it showed she had a slightly better position than she expressed. She may be unhappy that her blind mother only can help her with very limited funds, but there is some help.

Joachim: What is the future, now?

Maureen: I cannot work because I don’t have anybody at the top to help, cos’ you know having a job in Cameroon is based on who you know.

For now I’m still using the medication I had from Denmark. The medication I was using in Denmark and the one in Cameroon are very different, in Denmark I use to take a pill at 10:00 daily, but in Cameroon it is 4 pills daily, and after three months I have to pay for the test, and for sure I don’t have any money for that… It’s my mother who’s supporting me.

Joachim: Poul, can I ask you to make an evaluation of the case?

Poul: I think they have – the officials – been correct. They have carefully answered all my claims. They have allowed a meeting, and that is rare (…) The Ministry has emphasized some things in the decision that doctors, including her private doctor, has argued against, but the Ministry has not found their argument sufficiently documented. The Ministry made an estimate. No court or the Ombudsman can disavow this decision. The Ombudsman may drag the Ministry to the court if they have proceeded legally incorrect, but the Ombudsman cannot change an estimate.

My understanding is that they have relied on a standard practice – although there were exceptional circumstances in Maureen’s case that should be basis for a humanitarian residency permit. One cannot quite say they have done anything contrary to the law or their practice.

Joachim: On what basis can you make such an estimate?

Poul: The Integration Minister establishes a practice, and this may be more or less tight or restrictive. (…) They could easily have given her a residency permit, because if the premise for their decision is wrong they have declared themselves ready to resume proceedings… But then it’s too late. Then she’s dead.

Joachim: You are critical of their practice

Poul: Yes, but not the way they carry out their cases.

Joachim: What now Maureen? How does your future look?

I was hoping I’ll be able to stay in Denmark but all turn black! As Otman [visAvis #1] used to say “la vie sans vie”. Really Joachim bear with me. I would have loved to stay in Denmark. But my hopes where shattered. Take care.