Home Struggle and Politics We Are 300 …

In January 300 immigrants started a hunger strike in Athens with the demand of social and political rights. The immigrants stood their ground and gained some rights, but can we call it a victory? And what can we learn from the struggle of the immigrants?

by Antonios Alexandridis · Photos from hungerstrike300.espivblogs.net 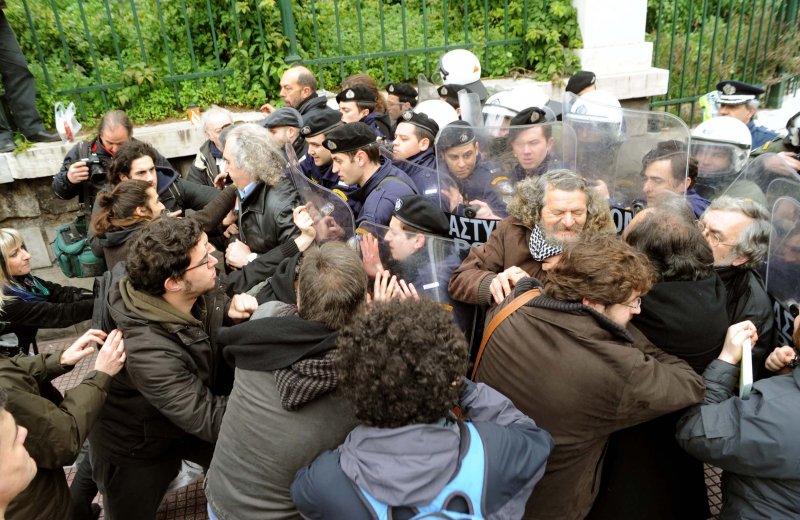 After the global economic crisis powered a domino effect that uncovered the chronic weaknesses of the Greek public and private sectors, the increasingly marginal position of immigrants, and especially undocumented immigrants, in the labour market has created a new dynamic. Undocumented immigrants living in Crete, in cooperation with left-wing organizations and anti-racist activist groups, decided to organize an action that would renegotiate and claim a new position for them not only in the political arena but also in the conscience of Greek people. The 300 immigrants, just like a contemporary version of the 300 Spartans, stood their ground and gave a first battle that cannot go unnoticed by anyone.

On the 25th of January 2011, 250 immigrants in Athens and 50 more in Thessaloniki mostly coming from Northern Africa or what we otherwise call Maghreb, started a hunger-strike. They were determined to fight this battle until the end in order to demand from the Greek government what should be needless – legalization of all immigrants and equal political and social rights with the Greek workers. On the 9th of March and after 44 days of solidarity actions, manifestations and demonstrations with the hunger- strikers in focus, the Greek government decided to satisfy the demands of the immigrants, but only partly and without using a clear language. The hunger- strikers accepted and the hunger-strike ended. The fact that such a difficult struggle ended without a clear victory has divided the solidarity movement in Greece. Can we call it a victory or not? Was it worth it?

One day before the hunger-strike began, 250 immigrants living with illegal status in Crete gathered in the port of Chania in order to take the boat to Piraeus, the port of Athens. Journalists of Greek electronic newspaper (tvxs.gr) were there to do interviews with some of the future hunger-strikers. For example, Rashid is an immigrant from Maghreb; he has been living in Greece for 5 years with his family and works in seasonal agricultural jobs. The fact that he is illegal in Greece makes his life much harder since he has no health insurance, and he is subject of exploitation by his bosses that often do not pay him. He said: “If it is one time more difficult for the Greeks now with the crisis, for us it is 10 times”. His mate Mustaffa was equally unhappy about the situation but also determined: “It’s very difficult to make the decision to start a hunger-strike but I am not afraid of anything. Either we will take our papers or we will die.” Together with their comrades they opened their banners on the boat to call the Greek people in a show of solidarity. Early next morning they arrived in Piraeus where representatives of various organizations, active in refugee issues and left wing political parties as well as people active within the anarchist movement, welcomed them with applause and slogans against racism and the exploitation of workers. All together they headed towards the Faculty of Law of the University of Athens in order to settle in a building that was at the time not used. The reasons for this decision were two. First of all, it was the only building that could be used to host such a large number of people and secondly, the University in Greece is a place under “sanctuary” where police may not enter without the permission of the Rector. All the student parties comprising the student council agreed to the decision (even though the parties leaning towards the right-wing “ND” and the “social- democratic” governing party “PASOK” withdrew their support later under huge political pressure). However, the settlement of the immigrants and their supporters in the building of the University caused a frenzy within the dominant Greek media. What they tried to do was to turn the public opinion against the immigrants by shifting the focus and the attention from the hunger-strike to the “illegal” occupation of a University building. Furthermore, the right-wing parties were calling for a “return to order” through a police invasion and a general abolition of the “sanctuary” system in the universities. 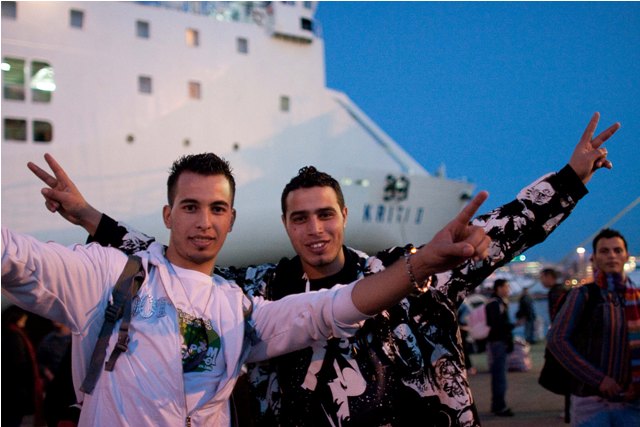 Reading the news updates on the night of the 27th of January was like watching a thriller. There were ongoing negotiations between representatives of the immigrants and their support groups on the one hand and with the university and state authorities on the other. Late in the night, when everyone feared that the police would finally invade, the two parties made an agreement. They would move the people to another building in Athens rented by the state. Originally the state tried to trick the strikers by claiming to have found a building for a resettlement but in reality it had not. The owner of the house would not agree to host the 250 immigrants. Fortunately, some people realized what was happening and they managed to evade the manipulation. A few hours later the subject was finally resolved and with a demonstration at 03:00 in the night they went to the new building that was rented for 15 days. After 15 days they would have to leave.

As the time passed by, more and more people became directly involved in the solidarity movement. In the one and a half months that the hunger-strike was going on, nine solidarity demonstrations took place in Athens only and many more all around Greece. Artists organized concerts, philosophers and social scientists (some world-famous such as Noam Chomsky and Slavoj Zizek) published announcements, politicians from the left were highlighting the importance of the action in the media (in the limited space that they were given), everyone did what they could do. Even the more traditionalistic Communist Party of Greece showed its support through their labor union “PAME”. The differences between left-wing parties, other organizations and the anarchist movement were forgotten, and all were united under the flag of solidarity towards the hunger-strikers. During the hunger-strike more than one hundred refugees were hospitalized while the solidarity groups were claiming that they were ready to fight back if the police would try to evict them from the house in which they were staying. Greek and foreign workers united like a fist fighting for justice.

At the moment the current “social-democratic” government is becoming more and more unpopular because of the austerity measures they adopted in cooperation with the IMF and the European Central Bank and also because of their inability to fight the growing unemployment and poverty. The government knew that if they didn’t start negotiating a solution for the crisis the possible death of an immigrant would cost dearly. At the same moment ministers of the government were claiming that they would not withdraw from their position that was “we will not be blackmailed by the hunger-strike”. However, on the 39th day of the hunger-strike, while more and more people were being hospitalized and the pressures to the government were rising with continuous direct actions and wider publicity, the government made a proposal. The offer was a residence permit for six months with possible extension later for six months, legalization for those that have been living in Greece for more than 8 years if they could prove it (through contracts but they rarely exist) and the reduction of the needed stamps (that one gets through legal work) that are needed to renew a person’s stay permit from 200 to 120 Euro. The hunger-strikers made a public announcement a few hours later rejecting the proposal. Nonetheless, five days later they decided to accept the offer after all. This was received with mixed feelings. On the one hand those that celebrated the outcome and on the other those that believed that the immigrants submitted to the pressures of specific more moderate solidarity groups that were afraid to be blamed the responsibility of a possible violent conflict with the state authorities or a hunger-striker’s death.

I find relevant here, before finishing this text, to return to the question that I posed in the beginning of the article, so is it a victory or not? These people weakened their bodies in order to be legalized but what they received in return was six months and then once again uncertainty. They managed to reduce the stamps needed for the renewal of their residence permit but, after all, few of them manage to get a legal job. So no I do not believe it is a victory in the sense that people did not get what they deserved or could get. But I believe that what we should keep from this story is that politically it is a major victory and an example for all immigrants and refugees in the world. Through organization and direct action they challenged the image that the media is trying to impose, the image of the immigrant as a person that lives in anonymity and in the margins, hidden from the rest, ready to be exploited by the local bosses because of their unfortunate position. On the contrary by struggling for their rights they said “Enough! We will fight for what is right!”. The immigrants are here to work with us but also to resist with us against the postcrisis capitalism that the power-holders are trying to create, a “new capitalism” as they call it with reduced social and political rights that the working classes conquered through centuries of struggles. Now, with the increased downwards social mobility from middle to the working classes because of increasing poverty and unemployment, the immigrants in Greece set an example for the people of Greece, Denmark and all the countries that are hit by the crisis. However, we cannot expect the immigrants to take the initiative since we enjoy citizenship status —and our position is somehow more secure [and therefore our position is more secure]. Together, all residents, have to fight for a better and more equal world where people will have equal opportunities and will not be discriminated against because of different cultural or social backgrounds. This new world will offer and support equal opportunities to work, education and health to all residing here, things that are fundamental for a society to prosper. Now we will all fight together, immigrants and locals united!