Home Featured Impressions from the border between Serbia and Croatia

In the no man’s land between Serbia and Croatia

The afternoon sun shines on the road crossing the little Serbian village of Berkasovo, a few hundred meters away from the Croatian border. Buses full of migrants arrive at regular intervals. The Red Cross, UNHCR and other organisations have set up stalls on each side of the road, working with local as well as international volunteers to provide water, bananas, biscuits, and bread to the newcomers. Some come directly from the Serbian-Macedonian border, others have been through Belgrade. After getting off the bus, people are escorted towards the border. No one tells them what will happen next.

At the roadside two abandoned border posts are situated. A metal bar stops cars from moving forward. It marks the beginning of the no man’s land between Serbia and Croatia. In this area, thousands of migrants are detained every day, caught between the Serbian police on the one side and their Croatian counterparts on the other. At this officially closed border crossing, the general rules are turned upside down: If you have a passport, you cannot pass. As a part of the cooperation deals between Greece, Macedonia, Serbia, Croatia, and Hungary, known as the ‘humanitarian corridor’ to Europe, the Berkasovo crossing has, as an exception, been opened to migrants. Political decisions are constantly opening and closing the different border crossings.

Nights of not knowing

During daytime, aid workers, volunteers, and journalists flock to the border post along with the many migrants. The latter hurry onward along the road after having been provided food and water. Children, adults, young and elderly people run, laden with fresh provisions, toward the border post, without knowing what they are running towards or what awaits them on the other side of the border.

At night, only the migrants remain. The stalls are dismantled, and the many humanitarian workers and volunteers go home. A wall of darkness and uncertainty stands in front of the many groups of migrants that arrive in a steady stream all night. None of them know that they have a 17km walk to the closed detention camp Opatovice in front of them.

Croatia is a member of the EU; Serbia is not. Thus, the Serbian-Croatian constitutes one of the entrances to the EU. Being unable to stop this migratory flux, Serbia and Croatia have, in an attempt to at least control it, agreed to coordinate a passage for migrants – albeit not without a great deal of diplomatic difficulties between the two states. Through this state-controlled route, migrants can continue their voyage into the EU. The migrants are driven in buses or shepherded by the police whilst they travel on foot along the country roads.

Buses full of migrants run from the border between Serbia and Macedonia to the Serbian-Croatian border. After their names have been registered and their pictures taken, people are transported onwards to the border between Croatia and Hungary. When they have crossed it, they are driven to the Austrian-Hungarian border, which they walk across. Here, the state-coordinated transport stops.

This road to the EU may be open; however, it is also long, winding, and uncertain. Both the Serbian and the Croatian authorities detain large groups of migrants for up to several days – at the border crossings, in camps like Opatovice, or at arbitrary spots on the route, creating so-called ‘bottlenecks’. The route between the two countries changes all the time. One day, thousands of migrants are stopped at the open border crossing between Sid in Serbia and Tovarnik in Croatia. The next day, the buses are directed to the little country road at Berkasovo, 10km away.

According to the Dublin Regulation, it is only possible to request asylum in the first EU country where one has been registered. State-coordinated transport appears to happen with neither Croatia nor Hungary registering people’s fingerprints in the Eurodac database. Consequently, people are apparently not registered in the Dublin system either. However, fingerprints are not the only proof that can be used in a Dublin asylum application. The police can also use bus and train tickets as evidence, leading to deportation to other EU countries according to the Dublin rules. It is, therefore, impossible to know how the Dublin system will be put into practice in the future, especially in the light of the many new challenges the European asylum system has to confront.

Many international volunteers have travelled to this place to provide humanitarian support to migrants where states and established humanitarian organisations fail. The majority are young people from Germany, Czech Republic, Sweden, and Belgium. The Serbian and Croatian authorities coordinate on an unofficial basis to constantly modify the migrants’ route. Humanitarian organisations and volunteers are, therefore, always a step behind in their efforts to provide supplies and medical care. 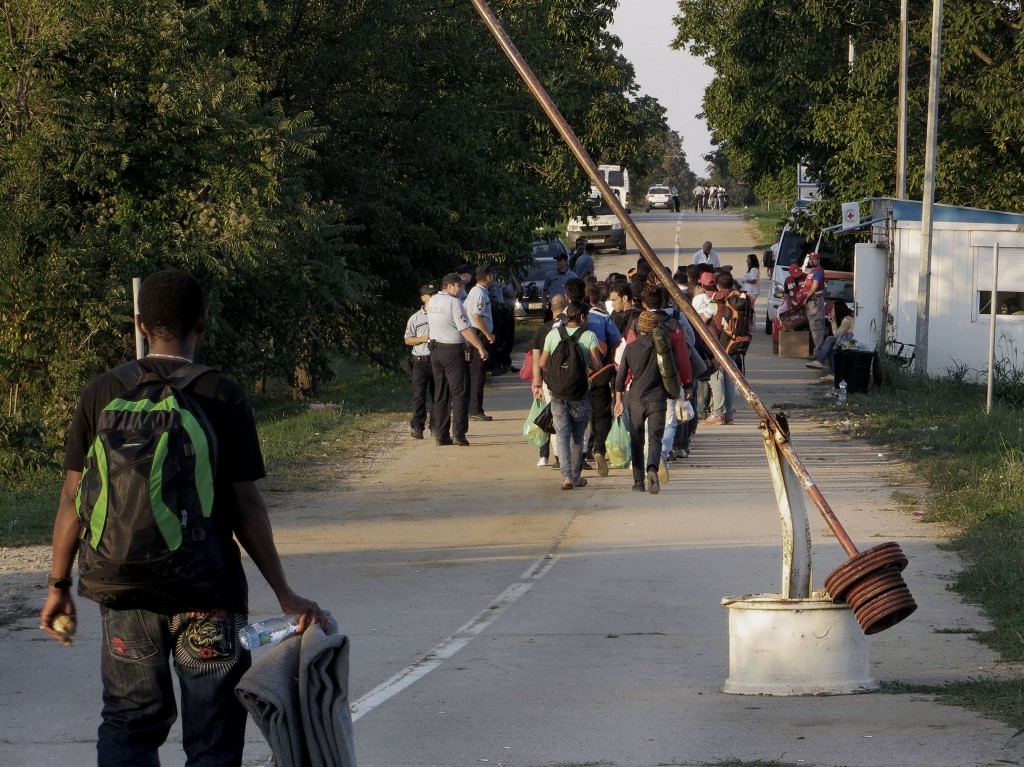 The border post Bapska, which is open as an exception 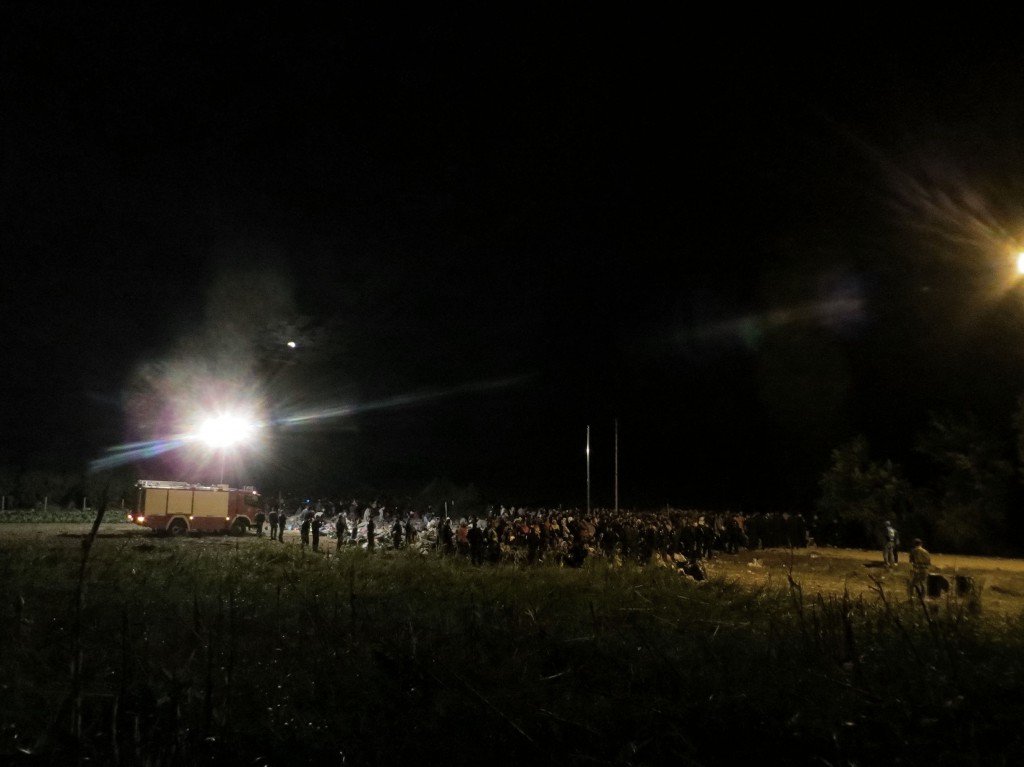 In the vicinity of Bapska, in the Serbian-Croatian border area, thousands of migrants are held at night in a field kettled by Croatian police. Through the wall of police, their voices are heard: ‘Let us go’. 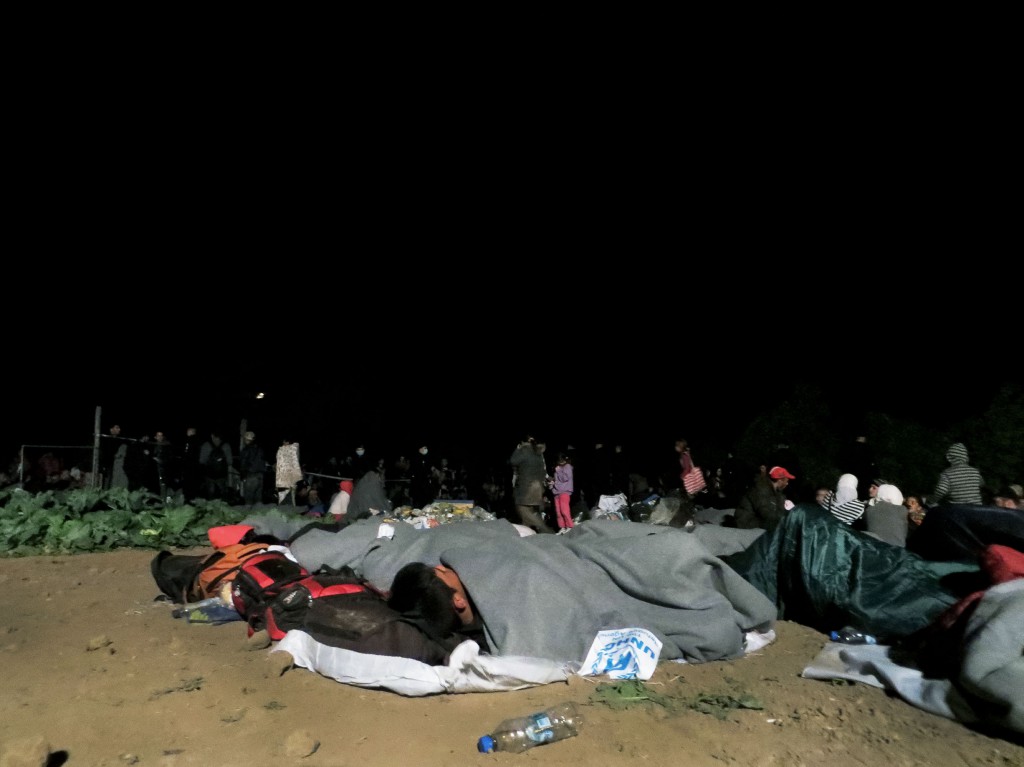 Uncertainty and lack of information

People sleeping on the ground in the field at Bapska. Many have been held for 10-15 hours without any information. Neither the police, the volunteers, nor the humanitarian organisations are informing the migrants on what awaits them: “It would cause unnecessary panic if they knew that they will be housed in a closed refugee camp”, says an international volunteer. 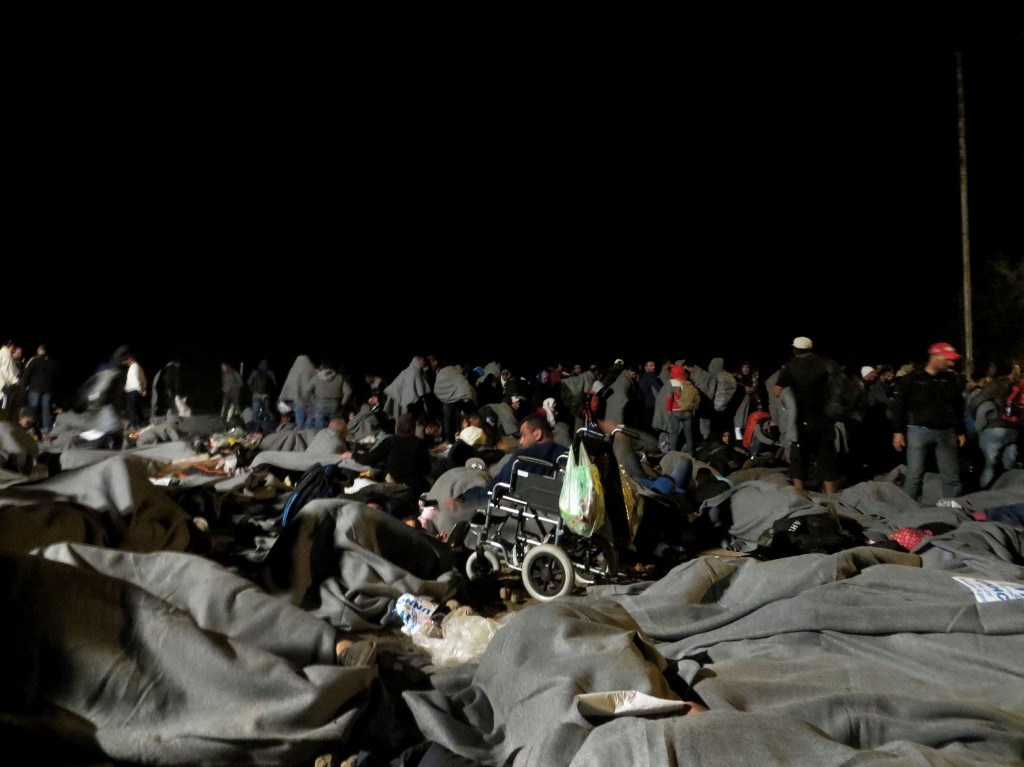 People wait the whole night to find out what will happen. 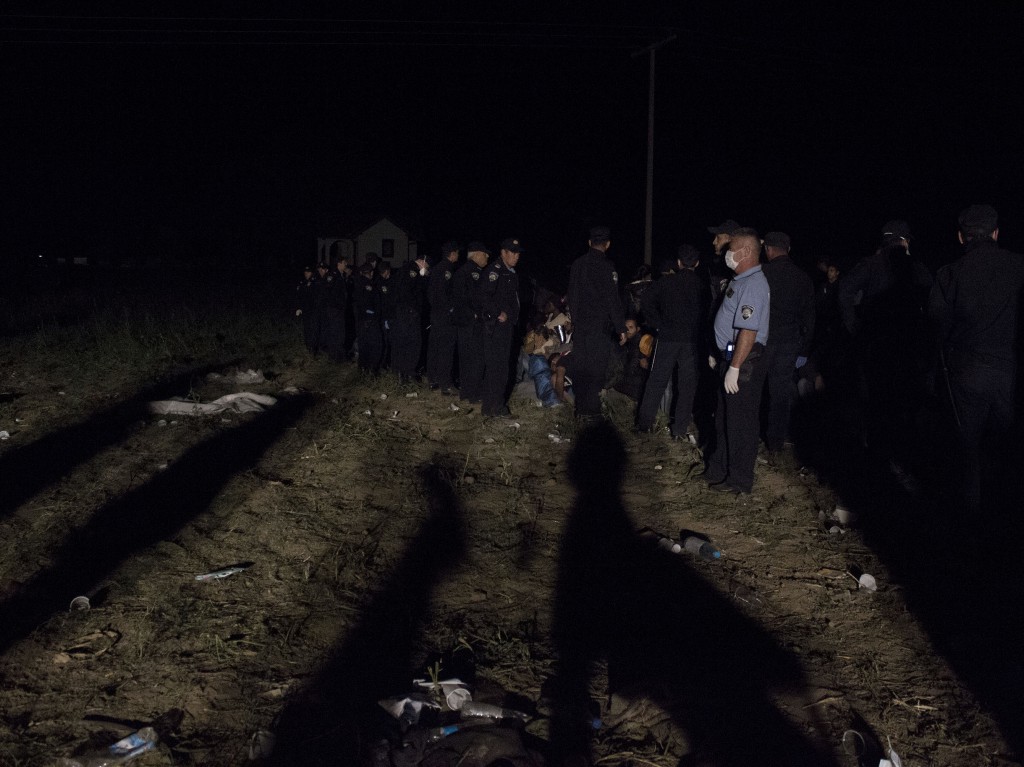 Slowly and gradually, the police let the many thousands of migrants held in Croatia go. Every few hours, they let a small group leave. However, they can only walk a couple of hundred meters down the country road before they are rounded up and held again on another field, surrounded by police. From here, people are directed to the buses. The police decide who can board. Nobody has informed the migrants about what is happening or where the buses are going, so the fear of being separated from family, friends, and companions is spreading. When a family is split, they shout at the police and attempt to resist separation. The police use force to get the protesting family members to move on. 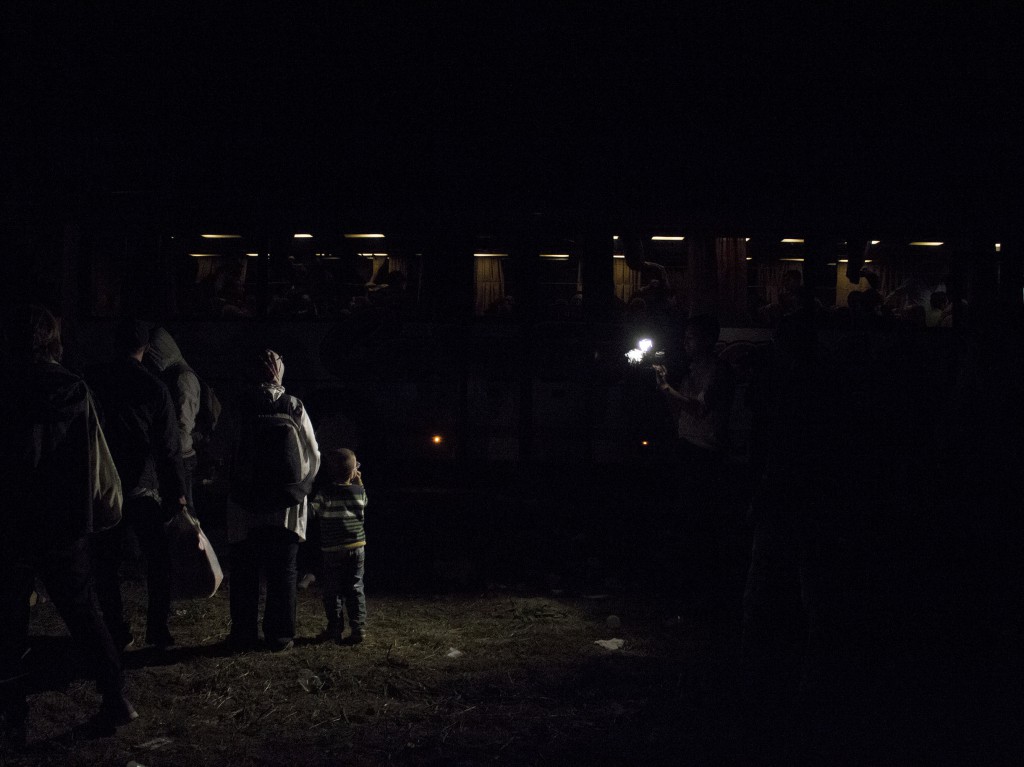 Suddenly, the authorities decide to change their modus operandi, so people are not being collected by buses anymore. Now they all have to walk in the dark for 17km, in the dead of night. The destination remains the same: the Opatovice camp. 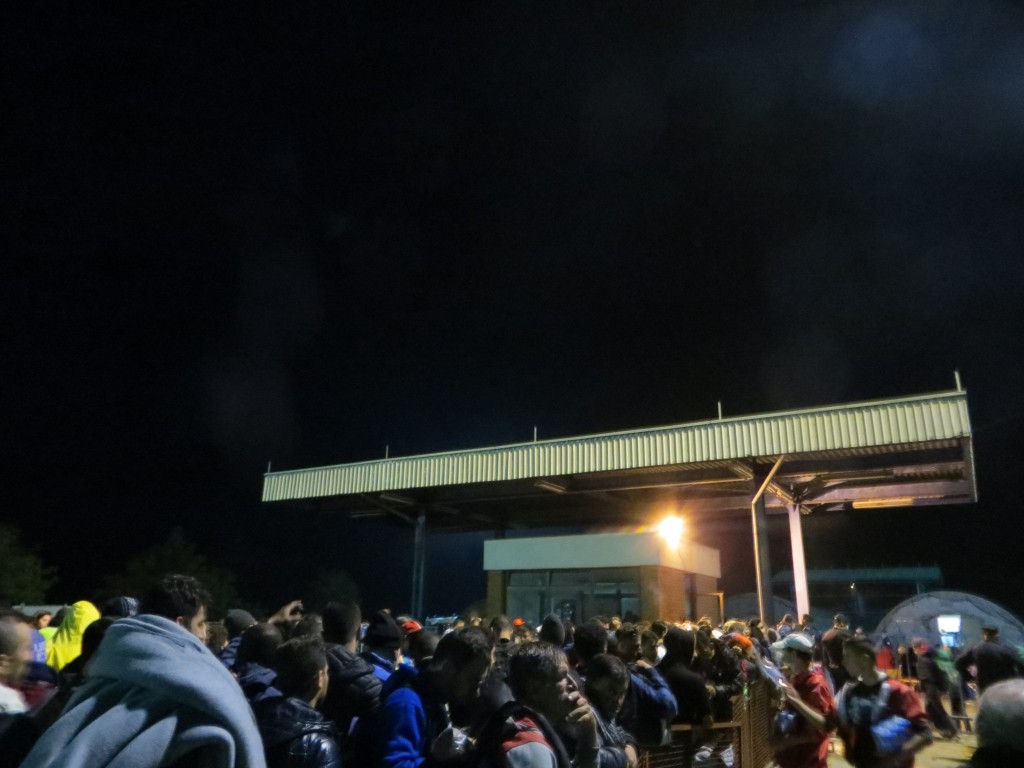 At the entrance of the Opatovice detention camp in Croatia

Opatovice is a closed camp functioning as transit point between Croatia and the state-organised bus and train transportation to the Hungarian border. The authorities drive the migrants in and out of the centre in irregular waves: first, 7,000 people were crammed into the camp, the capacity of which was, at that point, only 2,000. Then, the camp was emptied to make room for new refugees, and the official capacity was raised to 4,000. People stay in Opatovice for up to 5 days before they are transported on to the Hungarian border. At the exit, many tell of how they have been beaten up by the police or tear gassed during their days at Opatovice. 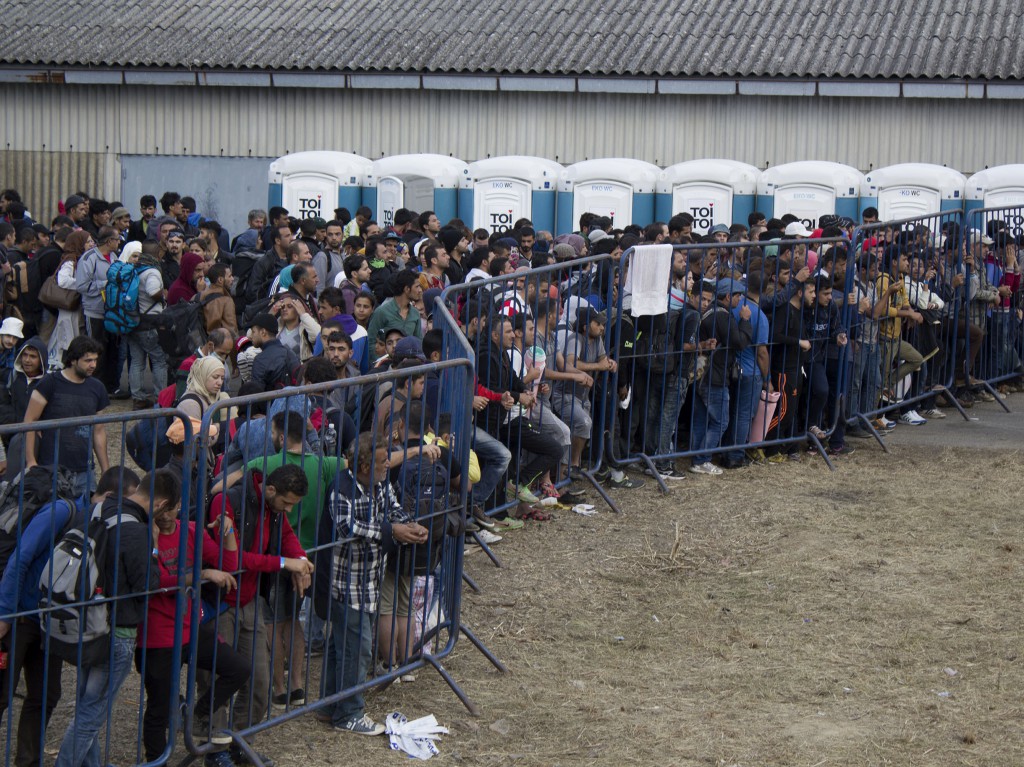 Separation, waiting behind a fence

A family waits behind the first fence of Opatovice for the rest of its members to come out, so they can proceed together towards the Hungarian border. The rest of the family is still being held behind the fence. 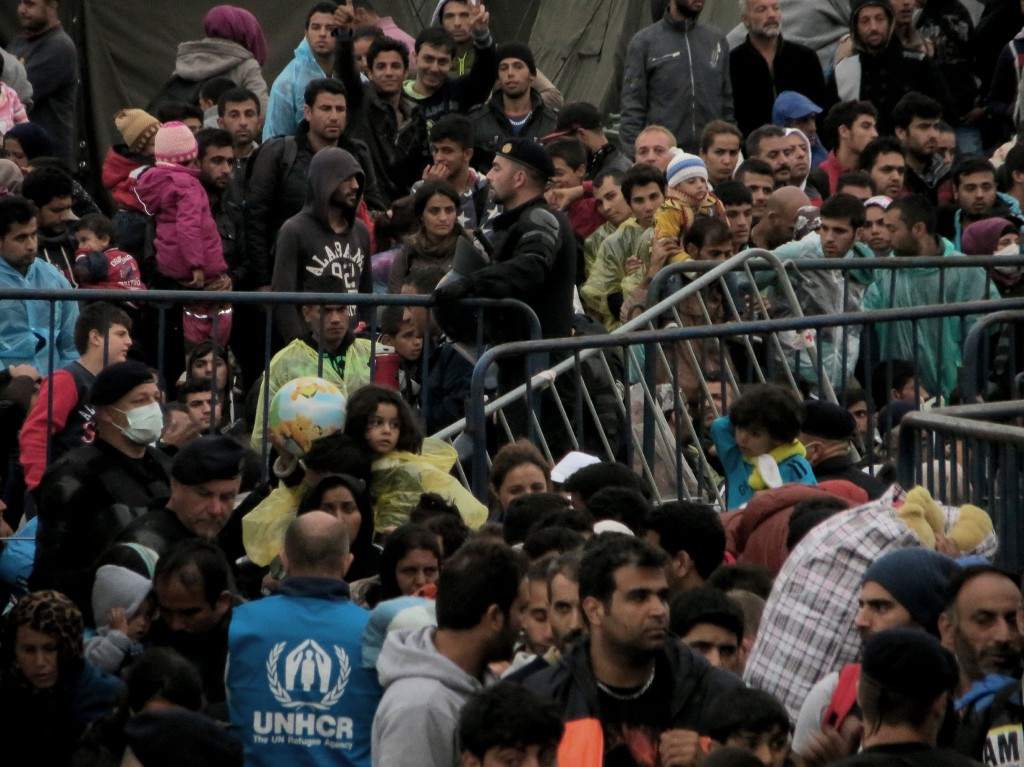 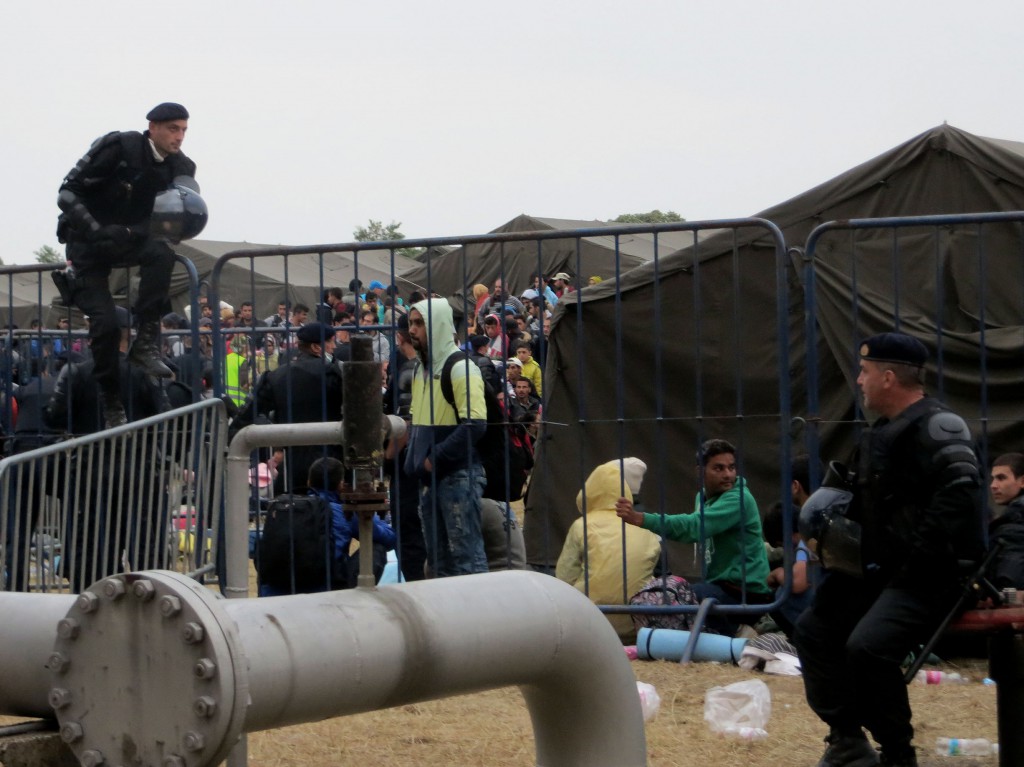 Police near a fence in Opatovice 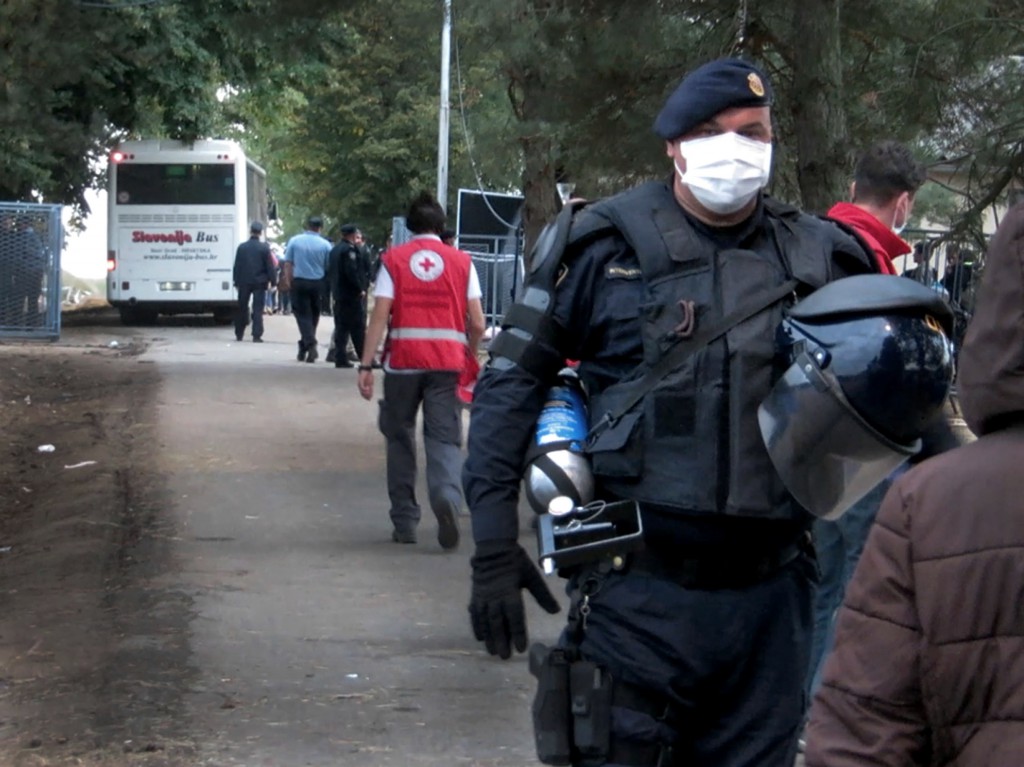 Teargas and the dream of a safe tomorrow

A police officer armed with teargas controls a group of migrants who are waiting to be seated on a bus and transported to the Hungarian border.