visAvis brings a personal account from one who had her first visit in a Danish refugee camp. 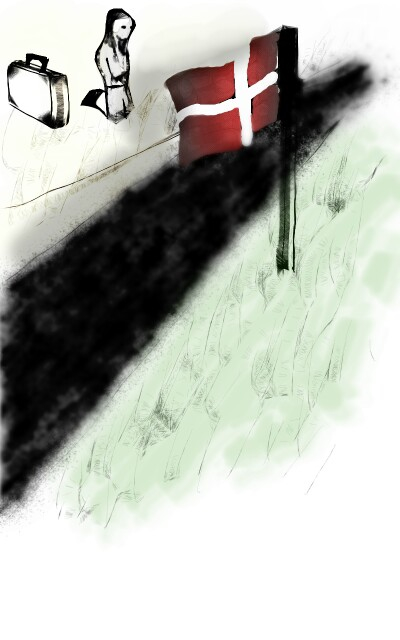 The bus stops. The doors open. As I pass through the gate, I see small grey and white buildings outlined in the quickly receding dusk light. After a 50 minutes’ bus drive, I feel a bit disoriented and I try to recover by taking a look around.

There’s nothing much to look at, unfortunately. The place looks deserted. The buildings have this sort of impersonal look which suggests that they are not intended for long-term stay. I notice that all the windows are covered by heavy curtains which block out the light. In the middle of the round empty yard a Danish flag is hanging, stirred only slightly by a chilly breeze. As I stare at it, an airplane flies above my head.

This was my first contact with Kongelunden’s refugee camp, built in a sparsely inhabited area in the south of Amager, 15 kilometres away from Copenhagen. My impression of temporary stay wasn’t quite right, however. As I learned later, the people who inhabit this place have not been granted asylum. Yet, they can stay there for months, and even years, while the slow bureaucratic system work on their cases. Even so, most of the times the answer is negative; and they are being deported.

It is amazing how little information there is about the asylum centres in Denmark. Elsewhere there is even less I suppose. But searching through the internet I couldn’t find even one picture of the camp, let alone its inhabitants, and no data about the number of people who live there, the available facilities, the activities they might engage into. Nothing. These people probably exist even less than me during the 3 months I lived in Denmark without a CPR-number. No wonder that none of my Danish friends knew anything about this place.

As I come closer to the house, I see a couple of broken toys on the lawn. About the time I reach the door, I think I can make out the singing or mumbling of a child’s voice. Then the door opens and in front of me there’s a small and stout Indian woman with the friendliest smile. A little boy, presumably her son, is peering to us behind her skirts.

Her name is Binderpal, and she’s the reason of my visit here. A common friend of ours, an Indian refugee who lives in Iceland, asked me to meet his ‘sister-cousin’ who is lonely and sad since her husband died.

Waiting for an answer

Binderpal is preparing a dinner for us. The adolescent who is now in charge of the kitchen is introduced to us as Loveleen, Binderpal’s 13 year old daughter, but she’s obviously shy and she avoids eye contact.

While Binderpal moves around in the little apartment, I suddenly realize how tiny it is. I sit in the sofa and try to occupy as little space as possible. Binderpal sits next to me and she’s very open and talkative.

She is 34 years old and she moved from India to Denmark due to a local conflict that made her and her husband fear for their lives. They fled to Denmark with their little daughter, Loveleen, while Binderpal was pregnant with her second child. After a long and difficult journey they arrived to Denmark, which they had chosen as a destination because of their friend network here, which they thought would help them out in starting a new life.

The little family spent 3 months in the Sandholm refugee camp in the north of Zealand. In Sandholm the situation was very difficult, because this camp works both as a reception for the new comers and a temporary residence for people who have been refused asylum and are awaiting deportation. This combination of hope and desperation creates a grave atmosphere which is not suitable for a family with small children. Soon after they moved to Kongelunden, waiting for an answer on whether they can stay in Denmark or will be deported back to India.

This was back in 2006. Soon after they moved Binderpal’s son, little Tanveer, was born. Not so long time after, Binderpal’s husband dies.

“He was taking a stroll with his friend to take some fresh air, because he said he was feeling heavy on his chest” Binderpal explains. “He had visited the doctor because of these symptoms some days ago, but he was dismissed. While they were walking, he simply fell flat on the ground”. His friend called for help but the ambulance reportedly arrived only 45’ minutes later. By then, he was dead.

Pills to keep her calm

Binderpal explains how depressed she felt after her husband’s death and that she’s been to the doctor’s because of frequent faints and a case of nervous breakdown. The doctor prescribed some pills which she takes daily.

What kind of solution can anti-depressant pills provide for that? I wonder. Just to keep her calm until she gets an answer. But when will that happen? After 1 more year, 5 years, 10 years?

I leave from the warm house with hugs and promises of coming back soon.The more the time passes, the more I feel like my recent experience in the refugee camp was a dream which is fading fast. “Next week I’ll definitely go there again”, I think. Will I?