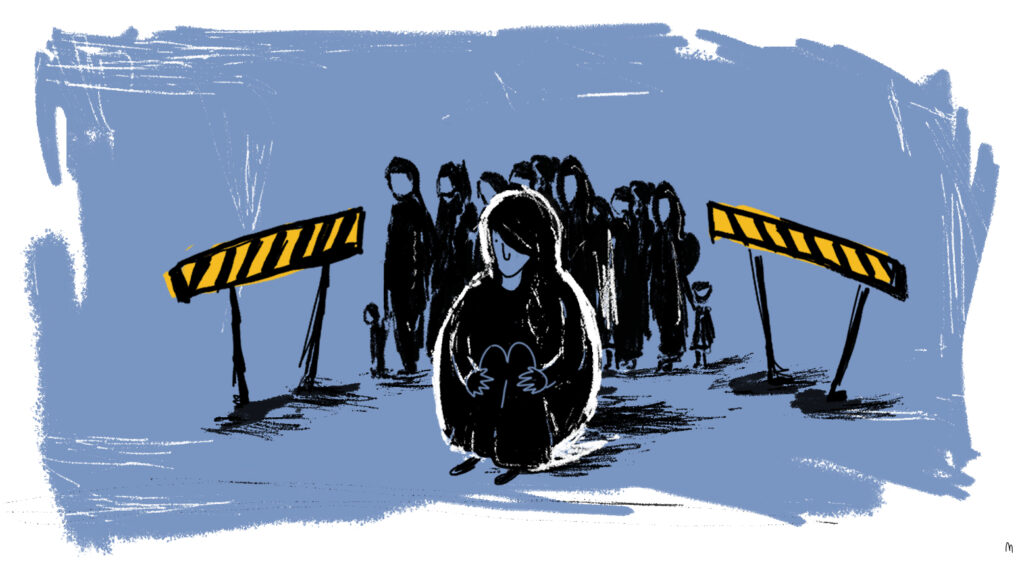 I am Shahlâ from Danish Kurdistan.

Ever since I can remember (but also before me), the Kurds have lived on the borders and in deprivation. They have always been a minority and treated as second- and third-class citizens.

Of course, I thought that this discrimination was only happening in our home countries. But I now realize I was wrong! We Kurds in Denmark are not only second- or third-class citizens, we are not accepted at all, and the rights granted us here are lower than those of animals. What does “Kurdish” really mean, what does the word evoke in people’s minds? Border settlements, deprivation…

Danish Kurdistan was previously located in Sjælsmark, but now it has been transferred to Avnstrup. About 90% of the people here are Iranian Kurds, and that is why I call it Danish Kurdistan. During my five years in Denmark, they have kept us in different places at the borders of society, always in the woods and outside the city. These are the conditions for Kurdish people all over the world.

Is Denmark unaware of the situation of the Kurds in Iran? Has the Danish government ever wondered why 90% of the people in Avnstrup are Kurdish? Do they not see that the reason we are living here, under never-ending uncertain and precarious conditions, for five or ten years, is that the conditions for returning are so much worse? Where are the Kurdish political parties to fight for the Kurds in Europe, who have also been forced to live as a border people?

In Iran, they say we do not have second- and third-class citizens.
Are you not considered different from other citizens when you have restricted access to government or military jobs? Restricted access to universities, social benefits and the internet because of your religion, language and minority status? When you are forced to live at the borders? I am a Kurd from Iran, but according to my fellow Kurdish people from other countries, we are all facing the same problems.

Please look a little more realistically at why Kurdistan has emerged in Denmark – if you do not see it by now, let me explain. It is because of deprivation. Because we do not have access to regular facilities in Iran like the rest of the public, and for this reason we are unfamiliar with immigration laws and other legal rights. Because the rulers of Iran are either at war with other countries or harassing us under various pretexts. They turn our place of residence, which is secluded from the rest of society, into a place of storage for weapons, ammunition and chemical bombs. We are not safe, and we just want to save our lives.

Apart from the fact that the Iranian government sees us as apostates because we ascribe to a different religion, we are also labelled as Kurdish rebels; now judge for yourself what awaits us. How can you still want to send us back to our country despite knowing all of this – a country whose executions and terror are known around the world?

I have to ask: can a person who has lived both in Iran and outside of Iran, and who understands the difference between living there and living here, be silent in the face of oppression against themselves, against their children, against their people?

Are you not teaching our children to speak up in the face of bullying, even if it comes from their parents? Now, how do you expect us to take our children, who have learned freedom of speech from you, and have been trained to stand up to oppression and to not be afraid, back to a dictatorial country? How can you send them to their certain death?

Do you understand that a woman who has lived under the laws of a dictatorial country, and then has witnessed life in a free country, that she, just like a bird released from its cage, would rather die than return to the cage?

Please think about the Kurds of Danish Kurdistan.