Home Migration and Borders Coming Out as Undocumented: Notes on Undocubus

“¡Sin Papeles, Sin Miedo!”, “No Papers, No Fear!”, with these words a group of illegalized migrants descended from a bus at the Democratic National Convention that was just about to re-elect Barack Obama as their candidate for President of the United States. 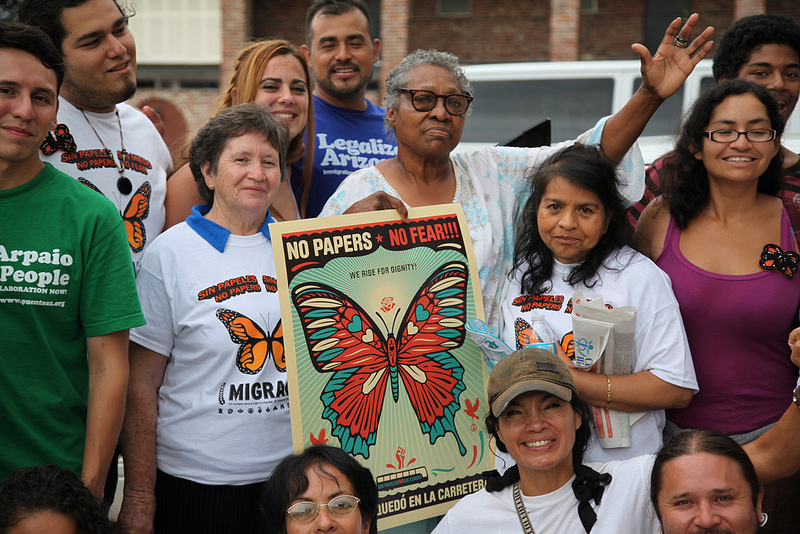 The campaign is called Undocubus and has been carrying a group of activists on an inter-state bus ride from Phoenix, Arizona, to Raleigh, North Carolina, challenging the immigration laws in a variety of states, manifesting the existence of the activists and many others like them as undocumented migrants, calling for attention and support for their cause. In many ways it can be said to have been fashioned upon the Freedom Riders’ actions as part of the Civil Rights Movement in the sixties, when activists rode inter-state busses throughout the South to challenge the Jim Crow Laws.

This time around, the Undocubus initiative did not target public transport but used an old worn-out bus to travel to Phoenix, Arizona, leaving on July 29th 2012 after two weeks of protest. The group of activists were a varied group of people from all around the country: students, workers, young people fighting for their future, parents fighting for the future of their children. As the one thing all the participants had in common was their lack of official documents, the very public nature of the campaign put each of them in danger, at potential risk of deportation, but they went even further by leading protest and civil disobedience actions in the cities they visited. The main aims of the campaign were to share the personal stories of undocumented migrants, draw attention to the issue and trigger a public debate.

“By The Time I Get To Arizona”

It is not by chance that the campaign started in Arizona. As documented by the civil rights lawyer and law professor Michelle Alexander in her 2010 book, The New Jim Crow – Mass Incarceration in the Age of Colorblindness, over the last decade the state became the main breeding ground for ‘tough on crime’ and ‘tough on immigration’ crusades as well as introducing several inhuman and discriminatory actions in these fields. The name of Sheriff Joe Arpaio has become synonymous with measures such as the reinstitution of chain gangs; the humiliation of inmates by forcing them to wear pink underwear; creating the ‘tent city’ prison camp in the middle of the desert under the burning Arizona sun; and more recently for employing racial profiling against Latinos/as in the search for undocumented migrants, authorizing raids and ‘stop and frisk’ tactics in predominantly Latino/a neighbourhoods.

This last practice, which up to this juncture had generally been considered unconstitutional in the US, has now been made law in Arizona via the SB 1070 Bill which makes it illegal to ‘shelter, harbour, or transport’ an undocumented alien, thereby overriding federal immigration laws and drawing censure as a legitimization of racial profiling. To European ears this may all sound rather straightforward, as most nations on this side of the Atlantic have similar laws, but in a US context it is considered an unprecedented expansion of the powers of the state. The Arizona SB 1070 bill has triggered strong protests and indeed, in the words of the African-American scholar and activist Cornel West in a speech given in Phoenix on October 2nd 2010, Arizona has become “ground zero in the struggle for freedom and liberty” and “the frontline in the struggle for justice.” As the lyrics of the 1991 Public Enemy song “By The Time I Get To Arizona” attest, this situation might not actually be new at all – but what is new is the fact that this time around illegalized migrants are increasingly leading the protests.

The Undocubus campaign is only the latest in a plethora of campaigns by illegalized migrants in the US over the last years. As chronicled in Eric Huerta’s essay “Undocumented Americans” (published in visAvis #4), the struggle of undocumented migrant students has gained wide support, with their campaign for the DREAM Act, which gives the right of permanent residency to all who have completed two years of military service or the equivalent at an institution of higher learning. This important, if rather reformist legislation has been heard several times in the Senate but has not yet managed to pass. However there have also been a variety of more general campaigns that focus primarily on establishing the simple fact of the existence of illegalized migrants within American society. Over the course of 2006 a number of independently organized demonstrations gathered under the slogan “¡Aquí Estamos y No Nos Vamos!”, “We’re here and we’re not leaving!” Something of a high point of this campaign was reached on Mayday that year, as “A Day Without An Immigrant” called on all illegalized migrants to withdraw their labor for one day to demonstrate the reliance of the economy on this rarely acknowledged sector of the workforce.

“Undocumented and Unafraid”, the slogan coined by the Immigrant Youth Movement in the fight for the DREAM Act, seems a fitting way to sum up an interesting aspect of these recent campaigns. The Undocubus activists themselves refer to their actions as a form of ‘coming out.’ As one activist explains in a campaign video:
“I remember being in a class about the sociology of migration. And they were talking about undocumented immigrants, and whether undocumented immigrants had or did not have the right to be in this country, and whether we stole jobs and all of those questions. And I remember sitting there thinking: all these people are talking about me like I’m not in the room. This was back in 2004 and I remember I raised my hand and I said: ‘Just so you know – I’m undocumented. So when you are talking about these issues you are talking about me and my family.’ And that was to me part of starting to think about our stories, because we can’t vote, we don’t count in all of these different ways. What we have is our stories, our experiences and our bodies and that is what we have been using in the coming out struggle.”

The precarious and dangerous situation nation states and the ideology of formal democracy force upon undocumented and dispossessed members of society cannot be denied. But one of the central achievements of the Undocubus campaign is precisely its contradiction of the dogmatic claim that participation can only be reached through formal identification. As noted in “Dignity Beyond Voting: Undocumented Immigrants Cast Their Hopes”, an October 25th article on Undocubus that appeared on colorlines.com:

“Voter ID schemes are largely rooted in an unfounded fear about undocumented people casting ballots. Yet, despite a deeply anti-immigrant climate, undocumented immigrants have participated in this year’s electoral process more than ever before.”

But the potential impact of campaigns, such as this focused on ‘coming out’, is even wider than their effect on electoral campaigns. By breaking the taboo and fear of being publicly ‘outed’ as an undocumented migrant they may well be paving the way for exactly that everyday recognition and self-recognition of the objective presence of illegalized migrants in society. That is recognition of the fact that “illegals” are always already participating in society – they are here, and they are staying!