Home Camps and Asylum Going Back Means Risking Our Lives!

In a letter to the Minister of Justice, rejected Sudanese refugees in Denmark explain why they will demonstrate in front of the parliament Friday, March 23rd.

By Group of Sudanese Refugees in Denmark · Illustration: Drawing taken from a collection of children’s drawing from Darfur 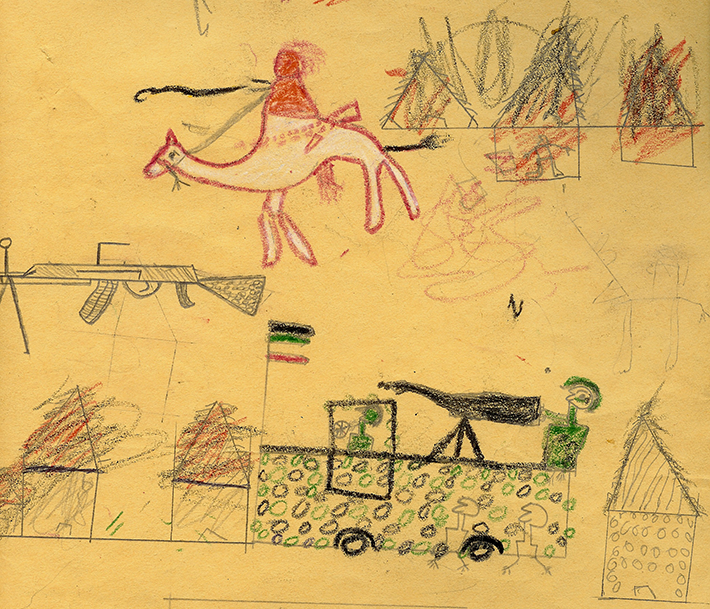 On behalf of all Sudanese asylum seekers in Denmark we appeal to you personally as the Minister of Justice in Denmark and to the Danish Government as representatives of a democratic country that respects Human Rights and protects its minorities.

With this letter we will pass on information about the current situation in Sudan, which Immigration Service unfortunately has totally misjudged. Sudan is still an unsafe area due to the ongoing battles between government and opposition forces. Going back would mean putting our lives in danger. A thorough investigation of the situation or a fact-finding mission in the country, will without anydoubt lead to the necessary reopening of our cases.

We are 20 rejected asylum seekers in total. 18 have got their final answer from the Refugee Board while 2 have received the first answer from Immigration Board. The underlying cause is supposedly: The war is over, Sudan is a safe country to return to. However, all of us originate from Abyei or Darfur where heavy fights are still going on.

It is well known that Sudan has a long history of bloody conflicts andthat ithas been torn apart because of war. The Danish immigration authorities have probably made their conclusion on the basis ofpeace agreements, but these agreements are weak and absolutely unreliable. Allow us to inform you about the Doha Agreement which specifically concerns the home region of the majority of our group, Darfur.

The Doha Agreement is not supported by the most important oppositional leaders. The claimed peace is not a reality onfirmground. The president of The Liberation and Justice Movement, Tijani Sese, who signed the Doha Agreement, does not at all represent the opposition in Darfur. The most influential leaders, Gibril Khalil from The Justice and Equality Movement, Abdel Wahed Mohamed al Noor from Sudan National Liberation Movement, and Mani Arko Minawi from Sudan Liberation Movement are all against the agreement. For that reason the agreement is insignificant and withoutimpacton the political developments in Sudan.

The unstable situation in Sudan is the evident proof of the failure of peace agreements in Sudan. Last year the government attacked highly populated areas in North and South Darfur and killed and injured many civilians and displaced more than 70,000 people. Sudan was officially divided in July 2011 between Sudan and South Sudan and the new border zone has since then been an area for ongoing armed battles. As stated in the weekly UN reports February 2012: “Armed clashes between the government’s Sudanese Armed Forces and the Sudan People’s Liberation Movement continue in parts of South Kordofan and Blue Nile.” This violence escalated heavily on the 26th of February and resulted in 200 killings on the 27th of February 2012 at the border of the south of Kordufa.

The president of Sudan, Omar Hassan Al-Bashir, and several ministers in the government of Sudan, are wanted by the International Criminal Court (ICC). On the 1st of March 2012, the ICC issued a warrant of arrest against the Minister of National Defence of the Sudanese Government, and the President’s former Special Representative in Darfur, Abdel Raheem Muhammad Hussein on 20 counts of crime against humanity.

We are a small group of asylum seekers in this country. We have lived many years in Danish asylum centers without any future prospects. For that reason we bring this request to you as democratic chosen leaders: Help us reopen our cases by correcting the information on Sudan available at the Immigration Board and Refugee Board. Our cases were rejected only due to the misjudgement of the situation in Sudan. Going back means risking our lives!

We will peacefully demonstrate on Christiansborg Slotsplads Friday, March the 23 between 2 and 4 pm. We will be happy to meet you there and exchange more information.

Group of Sudanese Refugees in Denmark