Home Migration and Borders No Border Camp 2012 – Organisation Without Borders

Organisation meeting for No Borders Camp 2012 Saturday 21 January 2012 at 6.30pm in the Trampoline House.

By No Border Stockholm 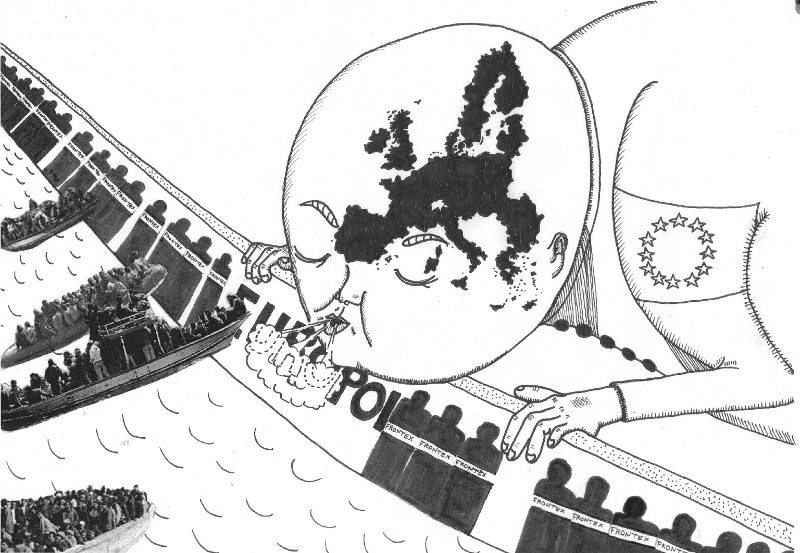 No Borders groups meet every year to make actions against the structures that keep up illegalisation of movement, this year the meeting is in Stockholm and on Saturday 21 January people from the Stockholm group come to Copenhagen to discuss with us how we can contribute to the organisation of the camp.

EU’s five-year-plan for internal and external security and migration “the Stockholm plan” has reached half it’s lifetime. In connection to this The No Border Camp will focus on, seek out and attack the places and structures that are the physical manifestation of a program for the total hegemony of whiteness norms. This applies to governments, institutions and all companies that in some way benefit from the implementation of the deportations, construction and operation of detention centres and all the people who are “just doing their job “.

Come to the Trampoline House and share your ideas and hopes about how we can make the No Borders camp 2012 effective and not least pleasant to participate in.

Below we bring the CALL OUT from No Border’s website:

We invite you to the transnational No Border Camp in Stockholm summer 2012: a week of civil disobedience, discussions, film screenings and direct action against the European migration policy.

In the last 15 years No Border Camps have been situated in border areas and conflict zones around the world. They have functioned as autonomous zones for the international movement for the abolition of all Earth’s nation-states. It has been a part of the work for a world where no one has the right to oppress others because of where they were born. To struggle against and question a world which at birth, sorts people into categories of nationality, gender, class, race and functionality. categories of below and above the order; authority and obedience, right and wrong. The exclusion following the borders of these categories are not limited to around geographical territories, but also runs within states, in the middle of cities, between and through people. This is the policy needed to maintain an authoritarian and capitalist social order:

Frontex border guards stationed in the east and south, with a military budget soon to be 150 million Euros.
Police seizing people without legal documents, in collaboration with ticket inspectors on the subway.
Refugees imprisoned in “detention centers” for an indefinite period, for undetermined cause, while waiting for “removal” by forced deportation or what may as well in some cases be called murder.
The EU’s development agency maintaining radar installations in the Libyan desert to “Manage migration flows”.
Restaurants and nightclubs exploiting migrants’ insecure and desperate situation and through that separating us even more.
You will never be a part of the nationally unifying ‘we’ called citizenship. if you do not deny yourself, customize yourself, makes you a white blank page in the service of capital.
It is these borders, the deeply anchored structures of systematic racism that are made clear in the “Stockholm Programme”, EU’s five-year plan for the mixing of the problem areas’ internal and external security and migration. According to the EU, free movement of people are a security problem. The Stockholm Programme is, as the borders it has at its directive, not connected to a certain place. Its shadow which falls upon us all creates barriers in our daily lives, between those who get to influence, the lucky ones who are included and those that are deprived of the right to exist.

Next summer, the Stockholm Programme has reached half its lifetime. In connection to this we will focus on, seek out and attack the places and structures that are the physical manifestation of a program for the total hegemony of whiteness norms. This applies to governments, institutions and all companies that in some way benefit from the implementation of the deportations, construction and operation of detention centres and all the people who are “just doing their job “.

We organize this camp because we believe that humanity is worth a vision of another life, an existence of mutual trust, love and helpfulness. We want to gather, to share each other’s creativity, to live our vision and to turn our anger against that which makes these things impossible. For a world where local and global compassion and responsibility are not opposites. Therefore we invite all organizations, groups, individuals and public to participate and contribute in what ever ways they are able to.

The movement for global solidarity and freedom from oppression in the past years has shown that we will not take no for an answer: if you don’t step down, we will step it up.

You can be sure that you will hear from us again — for what we do is important, and you are needed.