Home Camps and Asylum The lived – in reverse, translated and solidified

We are in a room at the Swedish Migration Agency, the first time the lived is to be told. Behind the table, close to the wall, we sit – the migrant and me. We have, of course, already spoken about the lived, how it can be conveyed in the best way, but it has not been told earlier. We are expected to deal with the story instrumentally, as we enter the room here. In the asylum, the lived cannot be accommodated – only the story can.

In the room, at the end of the table, sits a translator that is here to translate the lived to Swedish. The translator talks in the way that her work’s ethics requires: No emotional expressions, phrases or emphasis. A story is never the same when it is translated to another language. Fear, promises and suspicions are there, but cannot be expressed in Swedish. The descriptions can lose their shapes. The translations become a story about someone else.

An official employed by the Swedish Migration Agency sits in front of a computer and takes notes of the translator’s story. The computer is placed on the table at the other end, which keeps the official’s back to us. We do not see their face and nobody looks at the migrant as she speaks. Through the official, the story is written and immediately receives its final form. This story will get passed on to the authorities and the court, where it – for years – will be referred to as the asylum story of the migrant.

The room we are sitting in is managed by the Swedish Migration Agency, housed in a former psychiatric hospital in Gothenburg. There is a historical and etymological stringency in the room. In the early Swedish medical system the ’asylum’ was the name of the closed, psychiatric ward for incurable patients. These places were judicially and administratively separated from the hospital, where psychiatric patients were treated in order to recover. The symbolic meaning is considerable, but the meaning is still a spatial idea; the sanctuary, the refuge. We who sit in the room can measure the area with our sight or steps.

The story in the room is controlled by the official’s questions and pauses. Often the migrant is asked to tell the story in a reverse chronological way, in which it has neither been lived nor thought about. There are multiple aims behind this approach. A story, that begins with an ending, and thereafter is backed up, is expected to remove any untruths, as it is told. The lived should be able to be told in all manners, also backwards. As life is not lived in reverse, the distance between the lived and the told is increased. A reversed chronology also intends to place focus on the present. The story of asylum should not be historical or contextual – it should be immediate. But just like me, the migrant is both historical and contextual.

The official seeks causality, clear motives in the story and a clear view of its characters. To a poet, such questions can be motivating, a necessary interpretation of a narrative. But for the migrant these questions are more difficult to answer. Why did the police arrive precisely at lunch? Why did the sister remain silent? What was the real motive of the villagers? The migrant cannot answer these questions and if she decides to do so, it will be fiction. Nevertheless, it remains important that the questions are answered. A lacking answer gives the opportunity for an attack. That is why we have prepared everything beforehand. Asylum is an editorial work.

As we leave the room, hours have passed. The corridor is wide to make room for those hospital beds that used to be there. The story we have created can never be changed.

The Swedish Migration Agency does not find that you have been able to provide a story that describes your religious conviction in a trustworthy way. You have not been able to describe, in a convincing manner, the decision-making process or your steps toward the decision to convert. You have not been able to disclose your thoughts and feelings about your homosexuality. You do not provide a detailed description of how you have been affected by reaching clarity about your sexual orientation. It is the responsibility of the applicant to account for all circumstances that could provide grounds for a residence permit early on in the asylum process. The Swedish Migration Agency will assess whether the now disclosed circumstances concerning the sexual assaults you experienced could be regarded an escalation of your story.

The lived needs to be able to be expressed verbally in order to be considered lived. The one that has not been able to tell the story is not led in to the asylum, the refuge, but passed on to other rooms. 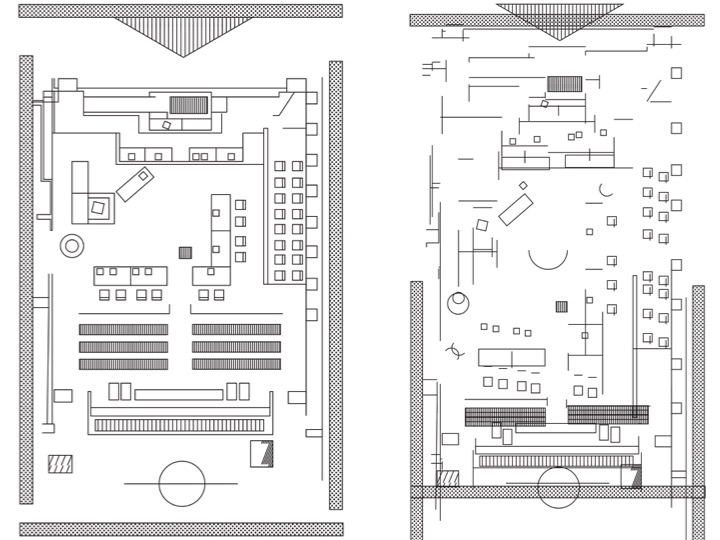 In Swedish, the rooms in the courthouse are known as halls, just like the rooms in the clinics. This implies a certain size and agency. In the hall, everything is different compared to other rooms. We can now look the official at the end of the table in the eyes. For centuries, the parties in the court have been placed this way in front of each other. It is a question of visibility. Those who spoke together in the room at the Swedish Migration Agency are no longer speaking together, they are now opponents. We brought the story here.

The migrant and I already met to talk about the courthouse. We had to talk about the decor, where the lived is to be accommodated again. I always sketch the courthouse on a piece of paper, quickly and almost ironically to avoid appearing too motherly. It is good to be prepared for the way things are placed. At the front there is a podium of pinewood, but it is not as high as the migrant had expected. We always sit on the right side. I do not know why. The opponent, the official, sits on the left side. There are 5 meters between us, and everybody talks into microphones fixed onto the table. You never stand up in a Swedish courtroom.

The intention is not that the lived should be retold in the court. The parties should focus on any discrepancies in relation to the aim, states the judge in his prologue. The migrant is only addressed directly by way of exception. I get the chance to speak and start the conversation with the migrant. Questions and answers are meticulously prepared in advance and everybody in the courtroom knows this. The story is under fire and we have to do what we can to defend it. We clean the story as we would with a dear one.

After me, the opponent, the official, gets the chance to speak. The process allows that the counterpart’s questions carry more weight in the court. The official’s questions are, unlike mine, allowed to be leading and offensive. Often, they are insulting. They are aimed at creating doubt about the story, to deflate our defence and undermine the story.

The story is most easily undermined through its distance to the lived; in that, which has been cut out or forced out. In the world outside the asylum, such distances are acknowledged, as we never live the lives of each other. Every story is fictive in its simplicity and its search for causality. But the story of asylum is limited and characterised by more factors than the general inability of humans to be each other. The migrant has lost, if she is caught in having turned her life into stories. Any experienced official knows how to reveal the distance and limits of the story.

The expression is, that judgements fall (faller) in the Swedish courts. The falling is the agency of the judgement. The court decides whether the story is true or not. The falling takes place in the decision.

If the live is not acquitted, there exists a final, more confidential room. Very few of us have been there; the agency only deals with a selected handful of the applications yearly. She, who is not believed by this agency, will afterwards have to hide in numerous other rooms. None of these rooms belong to the migrant. Every place is borrowed. The story is now missing its audience.

Saying that asylum is spatial is a way of speaking. The spatiality implies the limitations. She, who is not trusted, is dragged into a room without limitations; something endless. Where she is, is not clear. According to a spatial logic she is in the sanctuary, if she goes in and not out. According to the logic of the story, the life that the migrant without the right papers continues to live has nothing to do with the story.

This article was first published in the Swedish cultural magazine Glänta 1.14