I used to call myself “a world citizen”. Here in Prague, I have been faced with nationalistic ridicule and real-life mockery. I was taught that I cannot choose any identity I want. The world system is based on something that I can neither light-heartedly nor enthusiastically challenge. And I had to wake up.

Before I came to Europe to reside in Prague, I was looking for a place to practice my “individuality”. I supposed that I was going to escape a society with a brutally limiting structure of stereotypes, traditions and taboos to a society that respects individuality and celebrates it. It did not take me that long to realize that human nature is … human nature and does not change across borders, ethnicities and nationalities. And soon, not only did I find myself defined by an identity that has little to do with me, but the identity itself was defined by those who trapped me into it. To put it simply, I am not a “Muslim”, and yet the “Muslim” identity I was trapped in is not the ultimate evil, as those who trapped me in it believe it to be.

I grew up in a village. In a community that follows a liberal form of Islam. To put it simply for a “mainstream Westerner” I would say, “people in my area drink alcohol and they do not wear head-covers and that’s not against their religion”. I was not particularly proud of the liberality of my village, but I thought that I could give the “European” listener an idea about diversity in the world. I thought I was on an easy mission. Sometimes I would go on innocently explaining that, even though I am not particularly affiliated with any of the main religions, “Orthodox Muslims” themselves could not be such villains, as some outsiders tend to think of them. They do not inherently kill and suppress. I also gave mathematical arguments about how, in each society, people represent a spectrum of traits and characteristics.

It did not take long for me to discover how hard it is to change the stone-carved image, not only of those poor “Orthodox Muslims”, but also of me. We are destined to a hasty, simplistic and arbitrary definition of identity based on minimal indicators like names, skin colour, face features and ethnicity. I am an “Ali”, this means that I am most likely to be an angry seed of a terrorist, with peculiar rituals for foods and drink and daily life. Each element of my personality should follow the stereotype, until the opposite is proved. And this is not just in an objective way. I am guilty until proven innocent. And the proof if presented, is not conclusive. There is a halo of doubt and suspicion that protects all those who might see signs of differences, nuances and complexities in my personality, which shake the solid ground of stereotypes they rest on, and thrive on. 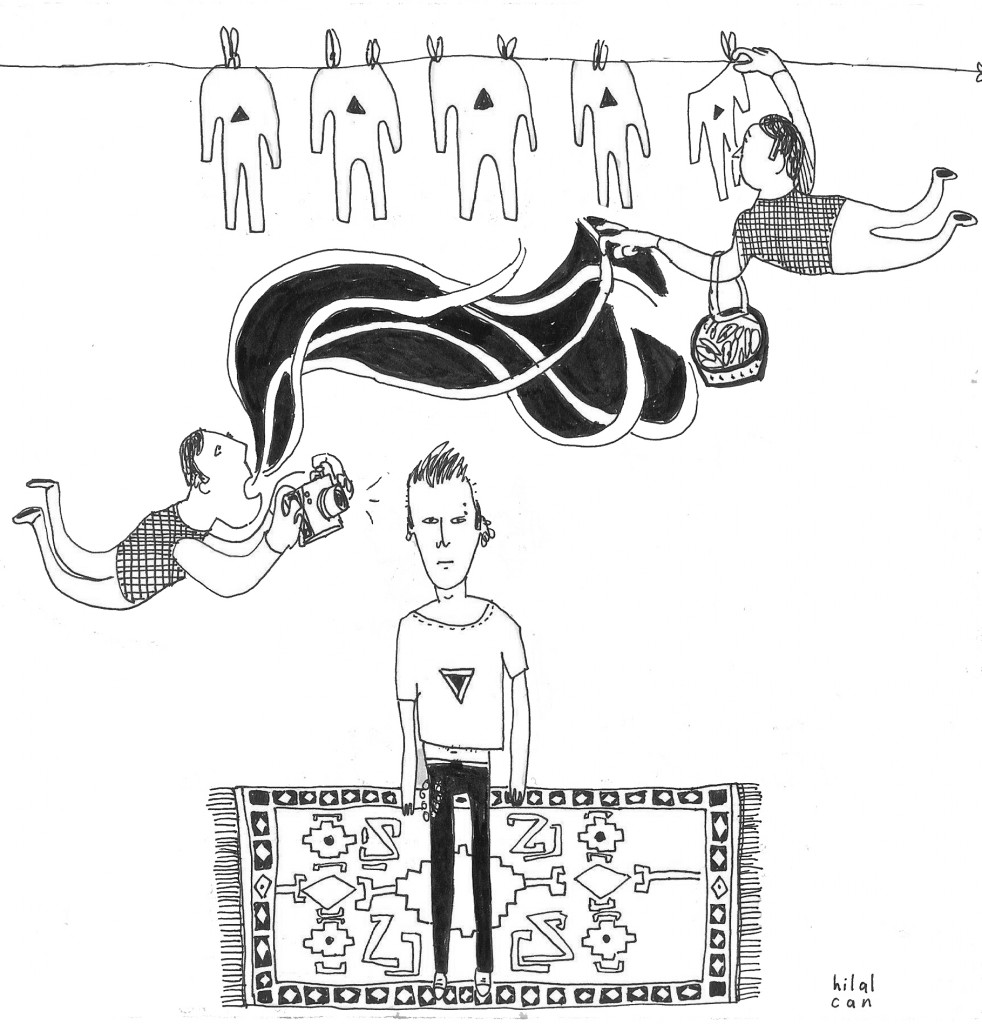 Being openly “gay”, and having a number of piercings on my face, was not enough to “reassure” my classmates, with whom I went to a bar, that I drink alcohol. And then came the usual questions and I would go on a monologue of “enlightenment” about cultural diversity and individual differences. Soon, I discovered that all they took away from my lectures is that I am defending the culture I come from, and trying to embellish the country and society I belong to. Some of the listeners would immediately forget what I said and ask me the same questions again and experience the same surprises again – déjà vu.

The identity that they make me wear should somehow also predict my emotional profile with a machine-like certainty. Being “from Syria” means that I am supposed to get angry when stimulated by the word “Israel” or “Tel Aviv”. In the middle of a date, the man I was seeing changed his tone and expression to tell me about his trip to Tel Aviv, in a way that was almost apologetic. Now, without intentions of enlightening, I told him that even though I might have my political point of view that would not please the Israeli government, I still have friends from Israel and I am “OK”. I just wanted him to feel more comfortable and easy. Some philanthropic instinct in me. Something similar but less stressful happened with another acquaintance who “admitted” that he has a “Jewish flatmate”. In time it got easier for me to react and wrap it up. Experience.

Gradually I realized that not only did I have to bear the burden of an identity that does not have much to do with me, but all the aspects of my personality that some others found annoying and unpleasant (according to their standards) were also ascribed to the prototype identity (being a “Muslim”, an “Middle Easterner”, a “non-European”). If I would whistle in a bar, I would be told that “people here do not do that”. If I tell somebody something direct, or what she calls “rude”, I would also be told that “it is not like in Syria, people HERE get annoyed if you say something like that”. I would usually wonder how someone could jump to decisive conclusions of what “people in Syria” are like and how similar “all of us from Syria” are. Would they generalize about their own nation and paint all of the “people here” with the same colour? This “rudeness” that is “normal in Syria” but “unaccepted here” could be something like telling somebody I have just had sex with (and here I am talking about intimacy) that the colour of their floor is annoying, or simply – again – whistling in a bar! It is appalling to see these highly personal characteristics become politicized. I developed some sort of allergy towards the phrases “people here” and “there where you live”.

To make it worse, I found myself even belonging to a wider lump of nationalities and ethinicities. I was not only an “Arab”. What mattered most was that I was one of those “non-whites”. When I would take the side of, try to defend or even admire “black people” or “Gypsies”, I would immediately be reminded that I am “one of them”, that’s why I was “taking their side”. My sympathy was understood as a cheap attempt to attack the “whites”. I have seen “black people” and “Gypsies” being terribly discriminated against in “Arab societies”. I defended them not because I feel we are all in a universal war against the “whites.” I did not talk about war or competition when I told one of my classmates that I read Toni Morrison – a “black American” writer whose books deal with discrimination against “black people” in “American” history. She (my classmate) went hysterical, and made me feel as if I attacked “whites” just because I expressed my great admiration of Morrison’s book, and she started to complain in an apocalyptic way about how “whites” are always depicted as the evil ones. Are they?