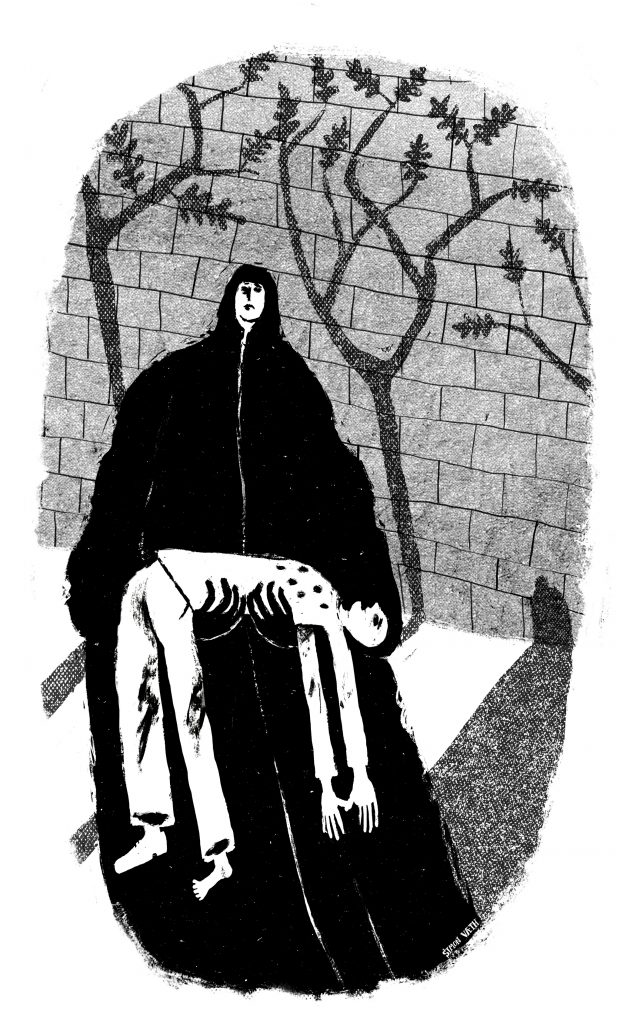 She sobs and begs them to give her her son. It’s been two hours now that she has been repeating the same sentence. The young guard, who is not trained enough to show no emotions, gives up and goes inside. She turns to the second soldier asking for her son. The soldier looks straight ahead, trying to focus on the tiles of the wall and shadows of the oak leaves that move off-beat to the woman’s spastic cry, now sounding like hiccups. Wind blows through the leaves, but the hiccups make it hard to hear what sound the leaves make; there’s only shadow.

The first soldier comes back with a body on his shoulder. He dumps the body in front of the woman. The second soldier looks startled. He hears the leaves of the oak tree now. The woman has stopped crying. She takes the blindfold off of her son’s face. The body is soaked in cold water. There is no blood except for what is filling six little black holes on his chest. He is still in his own clothes, though one shoe is missing, and his hands are still tied behind his back. She loosens the rope. Blue marks show on the wrists. She stands up, taller than when she came to beg for her son with some hope he would be alive. She looks at the soldiers with a gaze that they are not trained to decipher. She wipes the grief off of her face with her big rough hand and breathes in deeply. She has got what she has come here for. She puts her son’s arm over her shoulder and gets him off the ground. She balances the weight and they walk away together.

By the road there is a woman with her baby on her lap. Six bullet holes that she has covered with her chador. Cars slow down to look. But they don’t know.