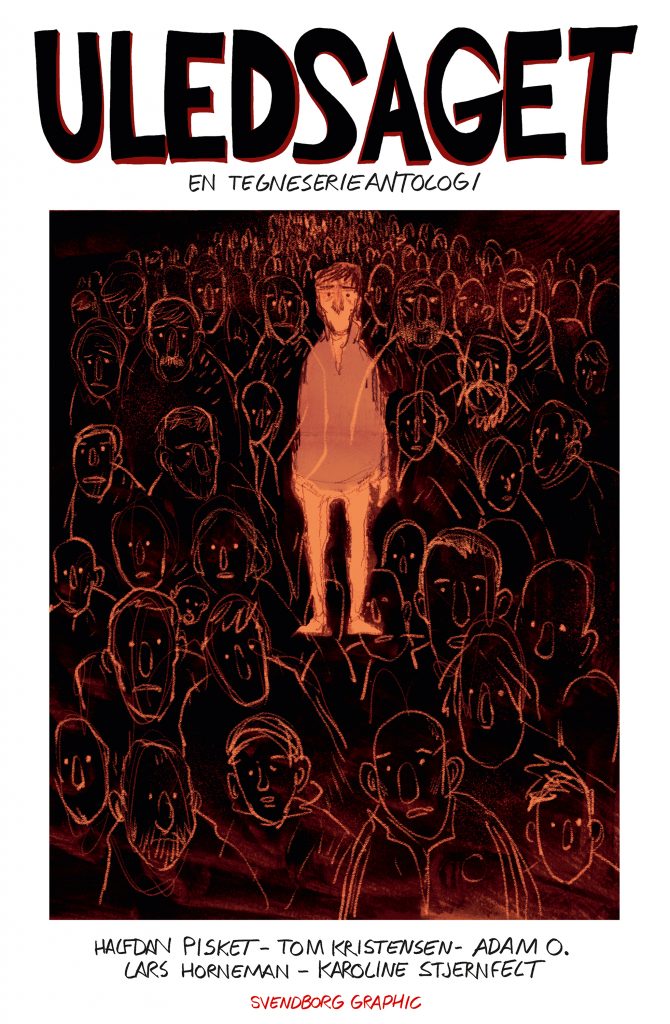 Uledsaget (Unaccompanied) is a comic book anthology about taking flight, and about life as an unaccompanied young refugee in Denmark. The anthology is the outcome of a collaboration between unaccompanied boys and Danish comic artists, supported and published by Svendborg library. Two of the stories recount flights from Somalia, another two from Afghanistan, and one from Iraq. The flights are either initiated by war, family feuds or a combination of the two, and oblivion is a central theme in all of the stories. The stories offer a pronounced critique of authorities, focusing on the use of direct violence by border guards and police officers, and the detention of refugees in a vulnerable position by bureaucrats.

It is rare that a public library in Denmark publishes anything containing opinions about the world at large. The code of practice today is that public libraries only publish so-called “language suitcases” (packages with texts, audio material, games, etc. for learning a foreign language, primarily oriented towards children), event calendars, local political strategy plans, local history, and annual reports. In the past they also used to publish books of local patriotic character about honorary citizens and large enterprises in the region, as well as local bibliographies on print. Rarely anything with a larger perspective than what can be contained under the old line, “From here my world goes”.

In the summer of 2017, Svendborg Library broke with this tradition when they published Uledsaget in relation to the comic festival Svendborg Graphic. One week in the fall of 2016, five pupils at a local school for asylum seekers started a collaboration with five comic artists: Tom Kristensen, Adam O., Halfdan Pisket, Karoline Stjernefelt and Lars Hornemann. The charity school (Asylskolen) is a school for newly arrived unaccompanied asylum seeking children and youths. The school was established by local inhabitants on South Funen where Hundstrup asylum centre is located. The encounter between the comic artists and the unaccompanied youths happened in a house in Svendborg that was once famously home to the German playwright Bertolt Brecht. This is where Brecht lived as a refugee during the prelude to the Second World War. The comic artists worked with the personal stories of these five boys.

Solidarity from Svendborg to Somalia

Karoline Stjernfelt’s “The Problem,” and Halfdan Pisket’s “The Line,” both tell a story about a boy from Somalia. “The Problem” directly addresses the collaboration between the comic artist and the boy. It indicates the potential for solidarity between Somalis and Danes, through the boy’s association between a comic by Karoline Stjernefelt about the influence that the Second World War had on her family on the one hand, and everything in Somalia that the boy himself escaped from on the other. The illustrations in “The Problem” are the only ones in the collection that are in black and white. In combination, the words and images poetically express a third meaning which neither words nor images alone can articulate. Oblivion is the goat-herd’s hooves which walk on the ground, or the tea’s steam which fills the picture frame.

“The Line,” on the other hand, is the most textually dense and directly politicising comic in the anthology. The visual expression is a prosaic sequence of small drawings in similarly formatted frames, like a short feature film with explanatory subtitles. The brutality is made palpable in the description of control as the only true companion during the flight. Black surfaces partially or completely cover most of the characters’ faces, while others’ are hidden behind face shields. A blood-red line appears as a metaphor and a concrete mark after the event that drove the main character to flee. It runs through the whole story. The European authorities’ treatment leads to memory failure and loss of identity in a world where everything you say can be used against you, even your own life story.

To war with bureaucracy

In “Little Soldier” by Adamo O. about the boy Abdel from Afghanistan, the critique of European authorities also stands out. The narrative style in the story is to let the events play out backwards, with Abdel as a tour guide for two Danish bureaucrats. They welcome him to Center Sandholm and ask him to explain the course of events that he has been through. After this they follow him figuratively on his travels until the end, which is the start of his flight. Abdel’s narrative leads him straight into the arms of the relatives in Taliban, which he escaped from. The bureaucrats leave him there and let him wait there until his next consultation. In the final drawing he is literally left behind, alone with a large group of warriors. The story is narrated in picturesque sepia-brown, resembling old photographs.

Another boy from Afghanistan participated in the making of “Brother” which is illustrated by Tom Kristensen. Here the visuals consist of metaphysically moving pictures. They are obscurely expressive and kept in golden and black-blue nuances. There are many faces, hands that grip, feet that run, empty rooms and small lights in blurry darkness. The fear of the authorities’ abuse of power is illustrated in the final picture of the boy and his brother as football players in plastic, separated and fixed to a metal bar on a table football.

“Divided” is the outcome of a collaboration between Lars Horneman and a boy from Iraq. The comic is made in Indian ink and kept in clear colours on large surfaces with bold black contours: the sad and the past in purple and turquoise, the pleasant and contemporary in warm colours, but with fractures of more conflict-ridden emotional expressions in the pictures where warm and cold colours are contrasted. “Divided” is the comic whose style is closest to a classic comic. It has a tendency to represent Iraq as unequivocally evil and cold, and Denmark as eternally good and warm. Something that stands out is that in contrast to the drawing of the fixed plastic players in the football game in “Brother”, the conclusion in “Divided” is illustrated with the text: “Have found new friends”.

“Facts” from the CIA

Each comic is introduced with a fact-sheet that describes the situation in the countries that the boys have escaped from. These facts have been obtained from the CIA, which cannot be considered a neutral contributor to the flow of information on flight and migration, let alone on internal and external relations in those parts of the world where the United States has foreign policy interests. A telling example is that the military presence in Afghanistan is consistently termed a “humanitarian presence”. This is not an objective factual designation. This involvement of external political stakeholders as “fact” providers is a disturbing blemish on the publication – as a work of art and as a personal political statement. The testimonies to be brought forward were supposed to be the outcome of an equal collaboration between the refugees and the migrants’ own stories on the one hand, and the comic artists on the other, regardless of whether the narratives were pleasant and politically correct in relation to state interests, or deeply personal and emotionally charged.