“My life’s place” is a project by Babak Inanlou with photos from the former refugee camp in Calais, France. The photos were taken in the beginning of 2016 before the camp was demolished by French authorities. They display the environment where several thousand people used to live during their exile in what became widely known as “the Jungle”.

The photos were shared among European university students who were asked to imagine themselves in the captured situation. A former resident from the Calais “Jungle” then commented on the photo based on their real life experience of the camp and its places.

With this project, Babak, who is from Iran and has spent time in the camp, both as a refugee in 2016, and later as a volunteer, portrays imagination and reality in parallel. He aims to challenge a young generation’s idea about life’s comfort and show how humans inhabit and establish relations with places. Babak is currently a student at Lille University in France. 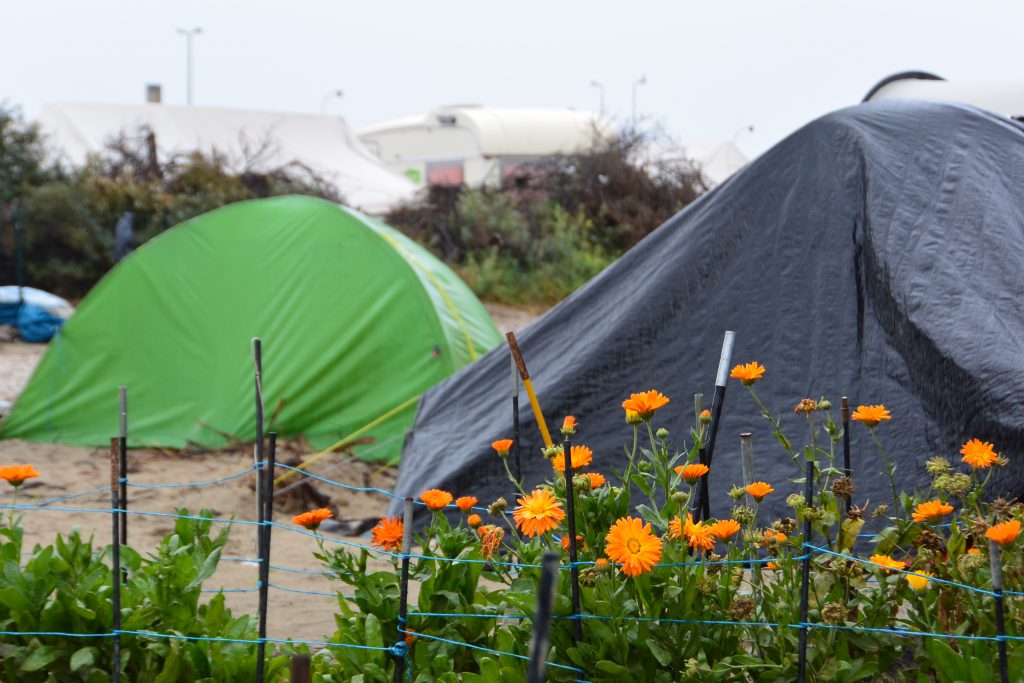 I cannot imagine what one might feel when living between two worlds; one world of hope of a better life and another world of fear of never finding happiness. I have big respect towards these human beings who live today with fear of tomorrow. One must have great determination and a lot of optimism. When I look at this photo, several feelings mix in my head: sadness, strength, hope, compassion but also rage. Why all of these words, why all of these feelings?

I imagine myself in the place of those who live in such conditions and I imagine that the only way for me to get out of that would be mutual help and solidarity, love and humanity.

On the first day, I found myself in the tent. I spent a night there with a lot of worries. I listened to the sound of rain and imagined how I could find a solution. 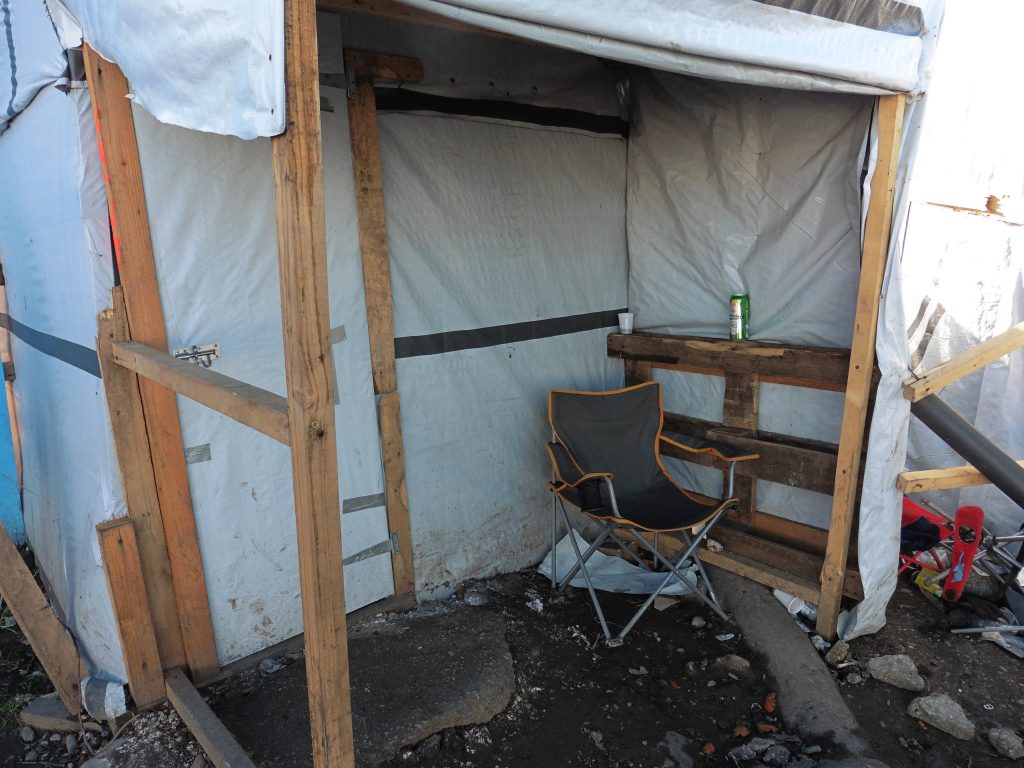 Seated on a camping chair made of canvas, sheltered from the sun by a makeshift tent, I see the day pass, like in slow motion, in the summer heat. Gulps of lukewarm beer quench my thirst and there is a sense of vacation in the air. Laughs burst in the distance. My friends are talking cheerfully inside the tent. For a moment, time and worries stop.

The tent was small and without light in the day. This could cause suffocation. As soon as I would wake up, I would find it impossible to stay inside the tent. There was no entertainment. However, I was left with one choice; to sit on this chair and watch life with a beer. 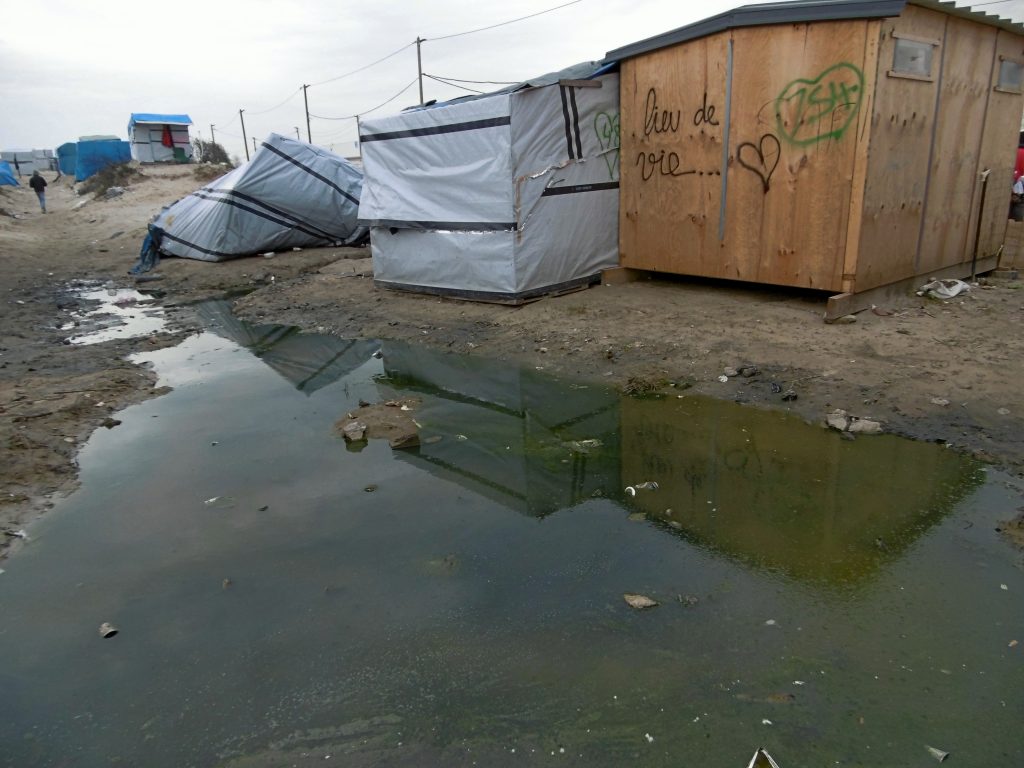 It is impossible for me to imagine myself living here. Away from all aspects of comfort, away from anything that looks like a place one wants to stay. You can’t even be there for a few seconds.

To be forced to live here, away from my country, would be like starting from zero. Without family heritage, only with my memories and with barriers that prevent me from going ahead. To live here would be like living a misery others do not want to be faced with; forced to live there not to bother them. To leave the country where I grew up, the country that I love, in order to live at this place that I do not like, and that does not want me, seems unimaginable for me. It is a place where only survival seems to have its place. The collective and the collaboration would then seem necessary and the mutual help would be crucial to maintain hope.

It was more of a place of survival. But still, it was better than living in a tent. My friends and I made a wooden house, thanks to the aid from the volunteers who brought us the materials. We covered the wall with sheets, but it still felt cold at night. We lit fire in a pot and took it inside. It was better. 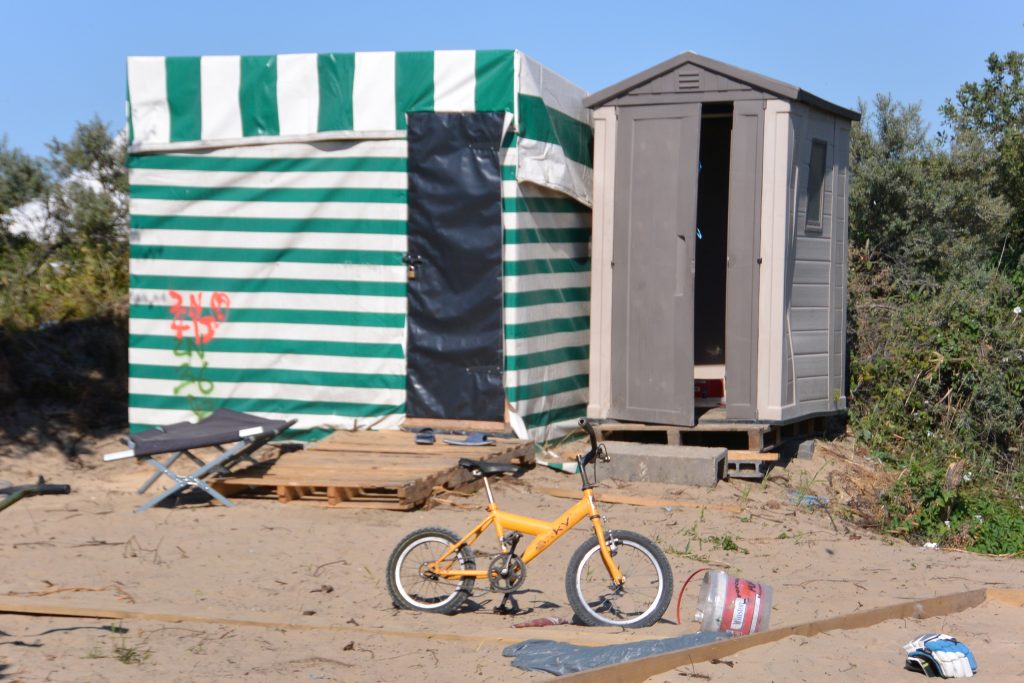 And if I were there, in front of this settlement of green and white canvas, I wouldn’t have any other choice than to make it my house, because one has to live, even on the territory of the hostile and the inhabitable. To try, at any cost, to make the place of obscenity familiar. To mark it with signs that are said to be suitable of human life, even if we seem to be getting further away from it.

Is a padlock enough to separate the jungle from home; a place of congeniality and sharing despite the discomfort and precarity?

I leave my sandals at the entrance on the wooden pathway, just in front of the door made of black tarpaulin. To shape the habitable, to create it. To survive.

Outside, daily life, objects from here and there are dispersed in front of me. They add to my imagination. A yellow bike on which I see a child, maybe mine, maybe yours, maybe ours; getting away from here. Innocence and lightness lost in the hope of a better world.

Tobacco in a can of Winston, it burns into smoke and turns into a dart playing on this beach that one can see in the horizon, to which one reaches out from the beginning.

A piece of land that is yet so difficult to reach, and distancing itself from our encamped aspirations.

Watching the children, it was a sign of hope; they play in this situation and that is a value of our existence. They resisted through their games. Sometimes, I would drown in their lives. It was better than ours. They were the symbols of hope. But unfortunately, we have created a difficult life for them. Inside the Jungle, I thought I was never going to have a child, because I was afraid of seeing a child grow up in this unjust world.