Home Art and Media Nothing dulls the Hunger as Thirst

It was hard to talk about Danish culture, especially to try to write something about the artist, who is already represented hundreds of in thick volumes of fine art encyclopedias done by reputable professors. The name Bjørn Nørgaard needs no introduction. He certainly has fundamental influence on all modern Danish Arts. To fully understand his work you must have absorbed Danish culture with your mother’s milk, which I was denied because of certain circumstances objectively. At the outset of his career, Nørgaard was one of the first students in the newly opened Copenhagen’s School of Experimental Art (called Eks-skolen) and represented the left wing of the avant-garde Danish Art. You can drive, my dear reader, across the state of Denmark from Helsingør to Hirtshals and any of the prominent monumental works installed there will be one of his creations, whether a Human Wall, HC Andersen-trilicitous or Thors Tower. In the conventional theory of surrealism, the form is not important, neither the subject. The only important is the form of the artistic imagination. The surreal artistic activity is motivated by the desire to reveal the hidden worlds of the unconscious. Breton’s writing is pure psychic automatism, surrealism is different from Classical art as a consequence of complete absence of mind control. All the above mentioned in my opinion can be fully applicable to the works in the retrospective of Bjørn Nørgaards sculptures in Gallery Suzanne Ottesen, entitled Englefisse. 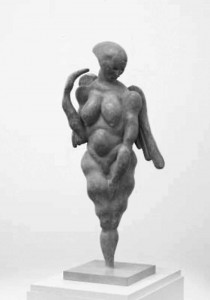 But, unfortunately, an attempt to convey Nørgaards sculptures in words is doomed to failure. To paraphrase the famous proverb: better to look once than to read a hundred times again and again.

I just try to paper my phantasmagoric associations that occurred when visiting this exhibition, listening to a small lecture about the chosen title: Englefisse

By definition, the angles and demons are completely incorporeal creatures. As such they are asexual and it is assumed that they completely lack sexual organs. The image of human figures with wings on their backs relies only on the biblical postulate that angles and demons are the embodiment of God, and God created man in His own image. Similar accounts can be found in the Torah, the Old and New Testament, and the Koran.

From the lecture prior to the exhibition, I learned that Englefisse is a psychological term, which defines ejaculation during sleep. According to the legend, medieval monks explained their similar mishaps with the ecstatic feeling arising from being visited in their sleep by angelic beings. The question arises how the angelic beings with no sexual orientation choose between incubus or succubus? Most likely it would depend on the particular sexual orientation of the monk? Ancient healers published for everyone to protect themselves from such unwanted demonic sexual contacts recipe for a balm. I hasten to tell you all. We must take the sagebrush, lupine, henbane, garlic, wild cherry, fennel, hops, sheep’s grass, and tongue of rattlesnake. Put all into a jar. Store your vessel under the altar, and keep it there during 9 messes. When one undesirable night newcomer will try to cross the threshold of your bedroom with clearly uncertain intentions, boldly grab your balm in one hand and glaze it to his/her forehead, eyes and the most sensitive parts of the tempter, do the sign of the cross, and you will be saved.

Of course, this monk-business is only a lyrical digression from the serious theme. I merely attempted to explain to our dear readers my views on the exhibition’s ambivalent and controversial title. The same ambivalence and controverse which seems to mark all works of the great master Nørgaard. I strongly advice all readers, interested in arts to visit his exhibitions and make your own opinion.

And finally I have a special request: Please, contact the editors if you found above mentioned balm helpful in a particular dangerous situation.