Home Migration and Borders Maltreatment on their route to Europe

The experiences of Somali refugees: Maltreatment on their route to Europe

The refugee route from Somalia to Europe is paved with cynicaltraffickers, risky voyages, confiscations, humiliations and torture.It is a scary space, and difficult to understand for one who has notexperienced it. Liban Abdi Abanur writes here, drawing on his ownexperiences, on these issues. 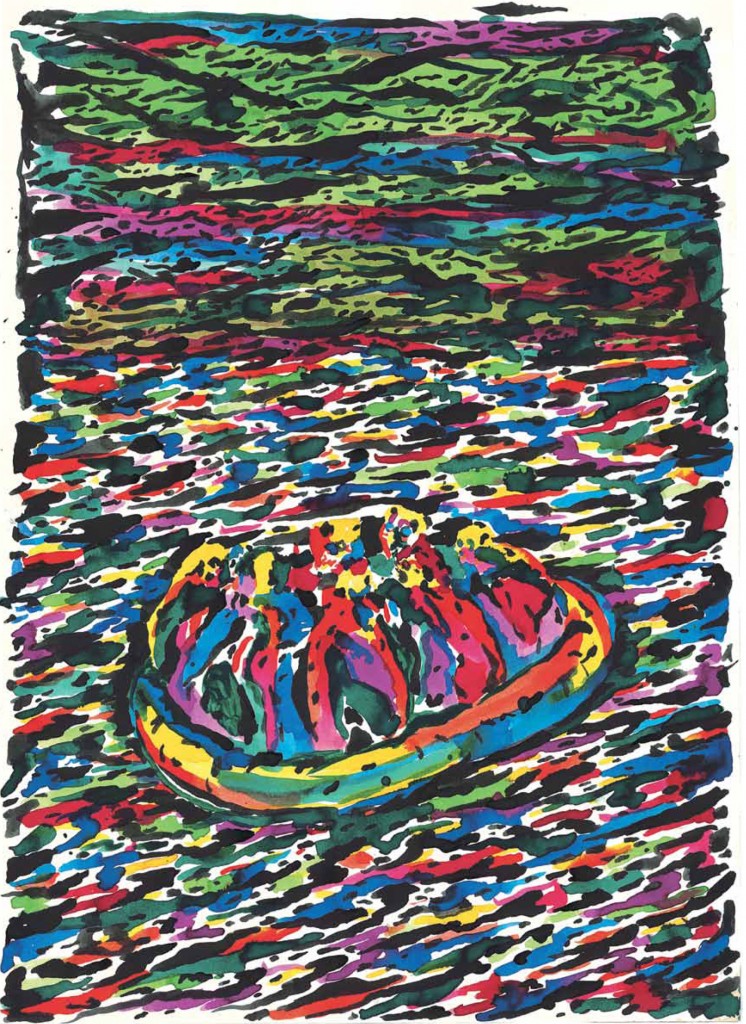 The capital of Somalia, Mogadishu, has become a placewith militants, fundamentalists, chaos and anarchywhere innocent people flee from violence although theysometimes cannot reach a place far enough from thebattle zone because of lack of finances.

Some of the 18 provinces of Somalia have stabilityand have harbors, like Bosaso, near the neighboringcountries like Yemen where most of the Somali refugeesimmigrate to. The desperate person arriving in Bosasoasks people near the harbor about boats to Yemen.There are a lot of smugglers who cheat the people andkeep the refugees under the rocky cliffs for days untilthey have collected the number of people they need toload the boat. The smugglers patrol near the cliffs andbring new people every hour; suddenly you ask yourselfhow many people this small boat can take? But everyonewill be forced to climb the boat, otherwise they willbe beaten with sticks. They pay money for this gambleof life and death.

If the boat starts rocking heavily from side to side inthe sea, the smugglers will decide who they will throwinto the sea or shoot. The boat is a narrow place whereyou don’t feel your own body. Some people vomit andthe people beside the vomiting person even sometimestry to survive from the vomit. But he/she can lose his/her life because of the movement in the boat. The smugglershave difficulties because of the huge waves, andto survive they most likely continue to reduce the passengers.At last, if you are one of the 150 lucky gamblers, theboat will reach a shore, and the smugglers will disembarkthe passengers hundreds of meters away from it.They do not care if you can’t swim. From the shore therefugees start walking to the refugee camps far awaywithout food, water and shoes in the long warm desertwithout shade or a place to rest. Sometimes a groupfrom an international organization brings biscuits and the water you were deprived of on the way. The estimatednumber of killed and drowned people during thecrossing to Yemen was more than 1,000 in 2007 andnearly 400 by mid-2008.

Yemen is a signatory to the 1951 Refugee Conventionand has traditionally adopted an open-door policytowards Somalis, granting them refugee status. Itis estimated that 150,000 Somalis currently live in thecountry. But the destinations of the refugees appearto be changing; they now include more self-made refugeehuts in the entire country. These ’invisible camps’are composed of different people: extremely vulnerablefamilies that fled from major cities because of the rocketinghouse prices, people that lost relatives in ideologicalskirmishes at home, former military or police officersthat have defected after being threatened by armedgroups, and many others.

They did not respect us ashumans, I don’t know why.The police there are like in Africa, they only know violence,nothing else. It really hit me.But in the meantime I met many really good people.

I and seven other people, three men, two women andtwo children, found smugglers in Syria who took us fromDamascus to Halab and from Halab to Afrin. Before wereached Afrin some soldiers closed the road, parking theircar across it. It was a narrow and curved road on the mountain. The driver told us to run, they would kill us if they caught us. He drove the car very fast towards them, and the armed men fired at us till he turned the car into a jungle.
The soldiers wounded the mother of the two childrensitting in the back. Everybody was scared and shocked, atthat moment nobody looked back. Hence I moved as fastas I could for at least six hours in the jungle not aware ofthe directions. At last I fell to the ground because of thirst.I couldn’t walk, talk or shout. I was even too paralyzedto cry. Fortunately I was found by a farmer who ownedthe ground. I could see him but had no voice to talk. Thefarmer took me to his home and gave me water and somefood. However, in the village I was the only black person.I also had rough dirty clothes. Then one from the villagetook me to the border near Turkey called Antakya wherehe confiscated all my money. Near the border I found otherpeople sitting on the ground, and I felt happy to see them.But we were kept in a farm without water and food andnot allowed to speak or move.

At the time of crossing the border they moved us like animalsfrom one place to another. They collected a lot of peoplein different places and then loaded us in a lorry witha motorcycle in front and behind us. They let us out in ajungle. I found two other Somalis who asked me if I wasstill alive.

The smugglers started gesturing and fighting both saying:”Liban belongs to me” (”you lost him in the jungle and Ifound him”). My first smuggler said: ”We can’t quarrelany more, I will kill him.” But we were somehow alreadykilled – as some refugees are somehow killed in Denmarksince they are sentenced to prison from their arrival.
With one hand hetightened the bagaround my neck. I couldn’tbreathe anymore. Theyrepeated the process of theplastic bag three times – everytime they asked the same question.

We used one of those small inflatable dinghies. We hadwrapped all our things in plastic bags. We left at abouttwo in the morning. After six hours at sea we finallyreached the Greek coast. We were discovered by the Greekcoast guard about 300 meters away from the island ofLesbos. It was a fast white boat circling around us withhigh speed. The police threw a rope to us and we weretaken on board. We were exhausted and only wanted tosleep. We put ourselves down on the floor, but the policeshouted: ”Don’t sleep, sit up!”, and they kicked us forcingus to sit up.

Another boat was called. They were rough with us asthey put us on this one shouting ”Malaka” at us and otherswearwords we couldn’t understand. We pleaded them:”We are humans, please help us!” The first little boat droveoff and the men from the larger boat searched us. Theywere looking for our money. As they were searching one ofthe policemen laughed and said: ”I am a doctor!” He found50 Euros on me which he confiscated.

The police threw the bread and water and what elsewas left in our dinghy into the water. The dinghy was putover our heads. The police boat took us back into internationalwaters. About two kilometers in from the Turkishcoast they threw the dinghy out. Then we were violentlyforced back onto it. They had made a small hole in therubber dinghy and only gave us one oar. We paddled desperatelyto reach the coast, but we were so exhausted wegave up after an hour. We thought we were going to die.The water was very still. After a while we fell asleep. Thena big boat came and rescued us.

We arrived in Greece on May 1. We were first taken tothe coast guards building, then to the hospital and back again to the coast guards building for identification. Wewere even beaten inside the building of the coast guard.They brought four men and asked us which one was thecaptain. I told them that none of them were the captain.Then all were beaten. I was also hit above my right eyebrow,the whole area was swollen. In the camp no oneasked me where the injury came from, neither the policenor the doctor. I was in the camp for three months. It’snot nice there, but I was satisfied because I had survived!We were so scared! When I arrived in Greece and the policebeat me I thought that the police are the same everywhere.They did not respect us as humans, I don’t knowwhy. The police there are like in Africa, they only knowviolence, nothing else. It really hit me. But in the meantimeI met many really good people.

To illustrate the violence let me tell you in details aboutan interrogation I experienced. Several times I was beaten.I had to kneel down. One policeman stood behind mewhile two stood in front of me. The one behind me hit mehard with a stick on the head. He hit me on the crownof my head repeatedly. I tried to protect myself with myarms. Then he hit my arms. I tried to look behind me, andthen he started hitting me again. The two policemen infront of me were armed and showed me their weaponswhile I was being beaten. They looked at me very seriously.They said: ”We are going to kill you.” The expressionon their faces was terrifying. I was very scared. Theother policeman came up to me and whispered in my ear:”Tell the truth. These two policemen are very dangerous.They will kill you.”

Then they brought a plastic bucket full of water. I waskneeling the whole time. ”Do you see the water?” Myarms were pressed together behind my back by one ofthe policemen. The other policeman put his hand on myneck and pushed my head down into the water. I couldn’tbreathe anymore. I was pulled up after some time. ”Doyou now know the color and name of the boat?” I saidno. He punched me twice in the face. The policeman behindme grabbed my arms again. I wanted to take a deepbreath of air. The policeman in front of me asked: ”Do youremember now, or not?” I said no again. He grabbed myhead and pushed it into the water. I was absolutely terrified.I thought I would not survive. When I came up againthe policeman asked again: ”So you don’t remember?” Irepeated that I did not. Then the policeman took a plasticbag and put it over my head. With one hand he tightenedthe bag around my neck. I couldn’t breathe anymore. Theyrepeated the process of the plastic bag three times – everytime they asked the same question. Then a policeman signaledwith his hand: That’s enough.

The long rough way I have passed some times stillmakes me out of my mind. When you are escaping fromthe borders with the smugglers together with women,children and weak people who can’t run and the smugglerssignal that there is problem on the way, it meansthat it is time for running. Some of the people can’t escapein the critical situation. And they are on the verge of deathif they are caught by the border guard or the local policein a country. So the only words the smugglers teach you is: ”Run, don’t stop!”