Home Camps and Asylum Momentum of the disobedient

Last year on October 6th, Refugee Tent Action set up shop at Oranienplatz in Berlin, physically claiming a space for asylum politics, which were at the time marginalized in Germany. One year onwards visAvis visits the camp to follow up on developments.

As described in the article ‘The Refugee Protest March’: “Let’s walk and see where it takes us”’ in visAvis issue 7, the movement originated in the beginning of 2012, as a reaction to the suicide of Mohammad Rahsepar, who was an Iranian asylum seeker living in Würtsburg. This incident triggered a spontaneous protest march a month-long, 600 kilometer northward march of refugees towards Berlin. The demands of the protesters focused on the right to employment and education, an end to deportations and a revoking of the Residenzpflicht – an arbitrary rule that restricts asylum seekers movement to the one region where they have been placed. On route, the protesters mobilized local support as they passed through German towns, and when they were not occupied with having to fight off nationalists they visited asylum camps, inviting the inhabitants to defy their Residenzpflicht and join the protest march.

Now, back at Oranienplatz, we stand with Yvette, an activist, among eight large green and white tents on the southern part of the square. We are opposite a tent which serves as the plenary pavilion and an information point. When asked about the size of the camp, Yvette reckons there is a constant presence of a couple of dozen people and about twice as many active in total on a daily basis. The majority of the active refugees at Oranienplatz are men. And the majority of them are civil-disobediently in violation of their Residenzpflicht – and thus the law in general merely by being here.

visAvis: Does the camp provide accommodation here for refugees who turn up, defying their Residenzpflicht?

Yvette: Yes. Somehow, in addition to this camp we’ve squatted a nearby vacant school, both to create space to organize, but also to use it for accommodation. And this is where people stay, live and organize.

visAvis: Given the recent raid on the Votiv-church (the police-raid of a Vienna church housing refugee protesters), is the camp taking any special measures – enforcing the tents with razor wire, guard-duty or digging advanced tunnel systems?

Yvette: Far from it! The situation is dramatically different although we are part of the same movement. Plus, with our situation there is no need to nurture that kind of paranoia. As it looks now we have permission from the mayor of the city (Frank Schulz), it’s even that official. The unwritten agreement was that we could occupy Oranienplatz for three months, but at this point we’ve just been extended. The mayor has taken a solidary stance, and so has the general neighborhood, which includes different local businesses in this part of Kreuzberg. They support the project however they see fit, most importantly by making us feel welcome here.

Refugee Tent Action is a largely refugee-led movement and just as civil-disobedient and self-organized as they declare in their radical manifestos. With the conversion from a protest march into a static camp after arriving in Berlin, there is a need for new plans of action. Over the past year activists from Oranienplatz have broken through to the media, organized anti-Frontex demonstrations, squatted consulates and been a catalyst for refugee politics in Germany. However, during the past months their actions and events in the city have been met with force, including violent assaults during initial custody and sentencing for non-citizens and citizens alike.

“Refugee Tent Action is a largely refugee-led movement and just as civil-disobedient and self-organized as they declare in their radical manifestos.”

Here, on the second day of our visit to Oranienplatz, the network Asyl Strike Berlin has arranged demonstrations to mark the one-year anniversary of the arrival to Berlin. Whilst attending the demonstrations together with around five thousand people, we speak to Napuli who also herself participated in the protest march last year.

visAvis: What has been the experience, so far, of having to settle down last year in one spot here in Berlin?

Napuli: This is our new and more static existence, what can we do? We are not from here, so we’re making our own livelihood possible, making it on our own. We’re up against a complete system, and this is most of all about putting things into practice. This is our one year anniversary, which goes to show that there’s no way we’re going to stop fighting the system. 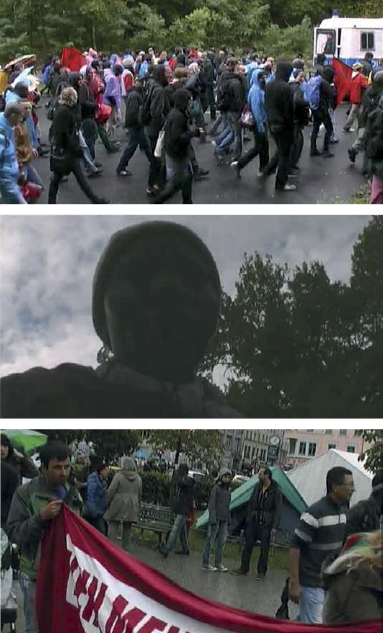 visAvis: Are demos and actions also used as a way of ensuring visibility, locally and politically, in order to keep the movement and camp alive?

Napuli: Not mainly. They’re the ones that had made us illegal, so this is our right, also this is how we effectively can fight back – the whole population of the world is being organized and controlled in the name of democracy, so here we see this as our right to take back the freedom that is ours. The movement is alive only to the extent that it is active.

visAvis: Do you feel that the movement is achieving its goals by also focusing on the German asylum context?

Napuli: Neither the problems nor the resistance is limited to here. It’s very essential for us to show solidarity internationally with refugees, like in the Netherlands, Austria and in Italy, where they are leading by showing how to put up a fight. We inspire each other.

Napuli disappears into a forest of banners in the crowd, followed by a cameracrew. The mere size of the demo gives a glimpse into the reach and momentum of the German asylum movement.

The camp at Oranienplatz is leading by example with an independent effort of organizing and a “do it yourself” attitude. This new take on asylum politics is seemingly what fuels the momentum of the activist movement as the camp itself is providing an opportunity for asylum-seekers to meet with local activists. The visibility of the Refugee Tent Action has also helped to get the media’s attention, and in the wake of actions and efforts of activists, even traditional media have become interested.

Asylum politics are not traditionally rooted in German left wing politics, but in the wake of more explicit political discourses on migration, assimilation and national identity in Germany over the past decade, this may change. The radical and traditional left is slowly shifting focus towards asylum politics. This development comes in conjunction with a general conservative wave throughout German politics. In this political environment the coffin of German multiculturalism has been nailed shut, and it would be foolish to assume asylum activism to automatically build more momentum. Rather, it is the level of civil disobedience and space for direct action in asylum-political platforms that sustain the momentum of the radical asylum-political movement. Likewise, it is also keeping the media and public interested. Currently there are Refugee Action Camps in nine different German cities, where they coexist with the more general No Borders organizing and movements against gentrification. All are radical developments that strengthen a much-needed radical breakthrough in asylum politics in Germany and abroad.