Home Camps and Asylum The structures that made people isolate themselves

In the fall of 2012, visAvis visited the Refugee Protest March in their tent camp on Oranienplatz in Berlin to conduct interviews, reports and to tell the protesters about their opportunity to express themselves through visAvis. A while ago we were contacted by one of the protestors who had written a piece about the experience of seeking asylum in Germany before and after the 2012 Refugee Protest Movement began. This version is translated from Turkish by Yildiz Aygün and edited by visAvis.

Sitting on the bench next to the door, a big-eyed young man had his head between his hands. He was constantly staring at the ground. Haydar had just been transferred to this place, surrounded by barbed wire, and whenever he went out, he found this man sitting on the same bench, looking thoughtfully at the same place. His head was shaved and he had thick and dark eyebrows and big eyes. The man avoided talking with other people, but Haydar attempted to establish a dialog with him a few times. His answers were short and negative. Haydar asked other people about him. They all had the same view on him, called him ‘insane’ and didn’t want to be seen with him. Going to the dining hall, Haydar walked beside him and asked him questions such as, “do you like the meals here?” He answered, “no. We have to eat. What can we do?” He talked and moved slowly; his eyes were sluggish and didn’t look back at Haydar’s. At the dining hall he sat alone at the table next to the windows. He was always eating his dinner fast.

Haydar began to sit next to him, and eventually learned that his name was Cihan and that he was from Elazig [a town in Eastern Turkey]. Cihan had been living in Germany for four years. Before he came to this camp, he lived in Braunschweig [a German city in Niedersachsen] in a peasant’s house. Here, he looked after the animals and worked at the farm. During this time, he was isolated which had a negative effect on his mental health. Haydar had been in prison for political reasons and continuously wrote and read. The other people in the camp didn’t understand why he wanted to spend his time on that. Only Cihan did. Haydar knew that they also called him ‘crazy’. He didn’t mind. Since he was a child he had been a rebel.

He learnt that Cihan had close relatives in Germany who didn’t accept him in their houses. Cihan didn’t want to visit them either. He didn’t want to be exposed to their discriminating and accusing attitudes. Cihan and Haydar started to talk together in Cihan’s room, and from then on, they began to understand and respect each other. 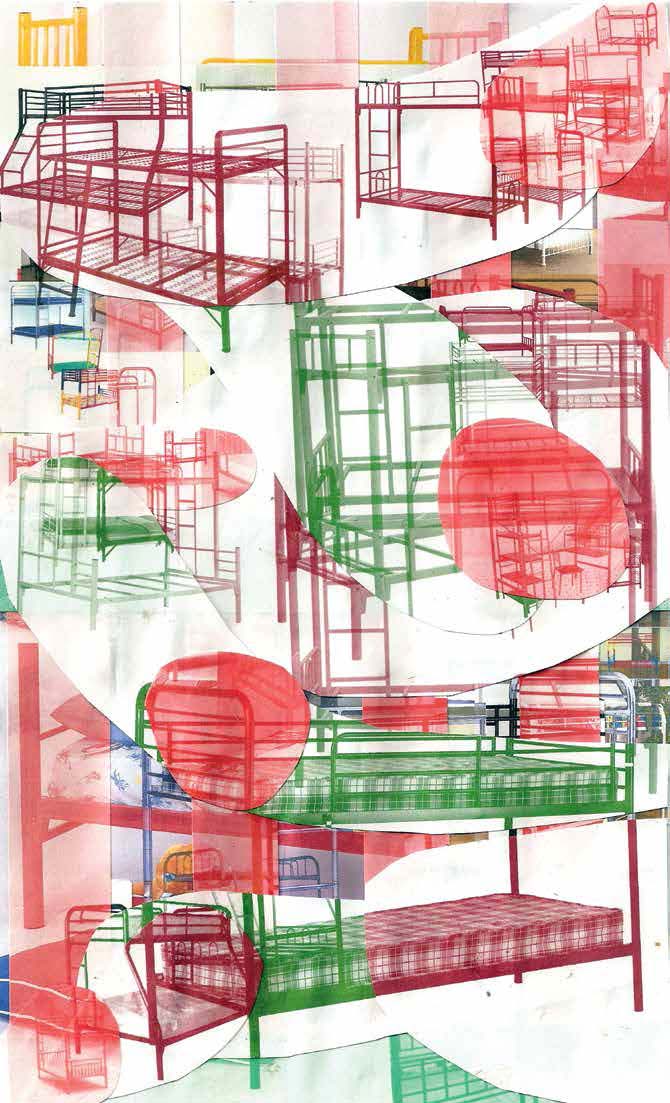 Cihan’s room was opposite Haydar’s. On each door the numbers were written with black oil paint. All rooms had bunk beds worse than the ones in the asylum prisons where Haydar had been for years. A person who has been in isolation in these prisons always stands out. This refugee camp had a similar system, you always remained in a limited area. Sometimes it affected Cihan, he missed meals and Haydar knew how he felt. He brought him food and bread and Cihan realized that Haydar didn’t accuse or abuse him and he began to trust him. Cihan began to read books and newspapers for Haydar. Haydar had rules for the people who came into his room. Every person who wanted to spend time there had to read an article and join the discussion about politics, because people who live in refugee camps are already seperated from community and most of them lack class consciousness, only talking about football and playing cards. Cihan called himself ‘revolutionary’. One day at lunch time he got angry with the security workers in the camp and broke a plate. When people asked him why he broke it, he replied that the place made him angry. His attitude began to change. He began to look into people’s eyes, stood up for his beliefs and ignored the people who treated him as a crazy person. The man who didn’t have any hopes was gone and a man who was dynamic and could struggle came. From then on Cihan joined the protest activities in the camp.

The silence in the refugee camp that had made Cihan isolated and lose hope was broken by a year of street occupations, invasions, resistance and fights. Films were made, articles were written, people were arrested, others were injured. They struggled against the structures that made people isolate themselves, they abandoned the refugee camps and built a common life instead of obeying the laws and rules which limited their freedom. These rebellions had different languages and colors. They fought against racist parliamentarian and opposition movements by shutting down highways, fighting the police and breaking the rules. They danced in the streets and set-up tents in public squares. They cared about other people’s sorrows, wars and exploitation.

Then one morning, when refugees had started their actions for freedom, a couple of uniformed police officers came into Cihan’s room and took him away. They forced him to go back to Turkey. His life in Germany had been isolated. Maybe it’s better now. Maybe he has started a new life, gained revolutionary ideas and is struggling for freedom.

Haydar witnessed too many tragic life stories. Everyone asks him why he didn’t get tired even though he had been in prison for years and struggled in the streets. They ask him why he hasn’t built a life for himself. But he thinks that living without feeling other people’s pain is not a real life. If anyone else isn’t free, he isn’t free. So he dedicated his life to bring freedom to everyone. He wrote diaries in prison. One day he would like to print these diaries as a book. He has a very colorful life and finds himself lucky to live among people at the bottom. At night he dreams that the people at the bottom overthrow all exploitation.